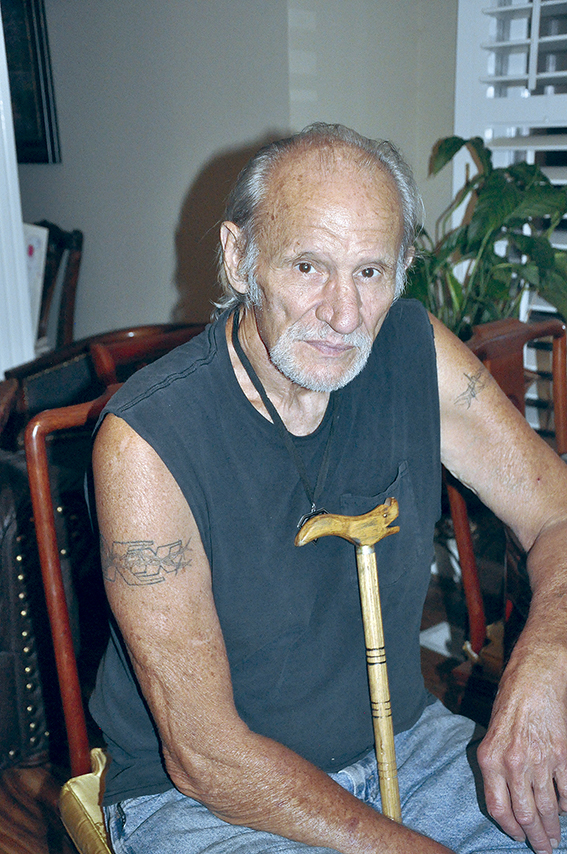 At 67 years of age, Russell Chenault has done a lot of living and a lot of hard work. Now living in the rehab wing of a local nursing home, Chenault still works as a backhoe operator for hire.

In an interview with La Semana this week, Chenault recalled how his father lied about Chenault’s age so he could work alongside him in the oil fields.

“I’m a heavy equipment operator, he said. “I’ve been a pipeliner ever since I was 12 years old,” Chenault explained. “I was 6-2 when I was 12 and I weighed 160 pounds, and my dad passed me off as being 18 years old. I went pipelining with him, and that’s about what I’ve done all my life is run heavy equipment.”

Chenault credits his career and his work ethic to his late father.

Chenault explained how he and his dad participated in the modern gold rush of the Alaskan oil pipeline construction.

“We went to Alaska and worked up the pipeline up there,” he recalled. “My other brother came up there, but he didn’t get to go to work.”

Later in life, Chenault’s fortunes weren’t always as good, especially when it came to matters of the heart.

“I’ve been married twice but I’m not married now,” he said, noting that the bright spot is his three girls.

Time in jail due to a DUI contributed to losing his first marriage and his first child. A second marriage gave him two more daughters, whom he raised as a single dad when his next wife, an alcoholic, abandoned the family for a time. He beams proudly when talking about his daughters’ successes.

A fire took Chenault’s house, which he had built with his dad, and he also lost his father, his brother, and his health.

“After my house got burned, I got sick,” he explained. “I had a defibrillator and it got infected. I lost weight – I dropped down to 140 pounds from 280 pounds that I used to weigh.”

But, he says, he’s regained some of the weight and rehab is helping him get his strength back.

Chenault describes himself as “a biker cowboy heavy equipment operator. I build hot rods. I ride motorcycles and I ride horses too.”

But he is also something of a philosopher.

“It’s been a good life,” Chenault mused. “Sometimes I think I had a lot of ups and downs, but when I get to really thinking about it, I wouldn’t trade it for anything.”

“I’ve been known as the black sheep of the family,” said Chenault, who is estranged from a sister. “And I’ve been on both sides of the fence.”

But there have been a lot of good times as well, especially in his youth.

“I went to Woodstock. I’ve been to all the big concerts, the Rolling Stones and the Beatles too.”

Working with his father on jobs using the rubber-tired backhoes they bought with money saved from their time in Alaska, Chenault always tried to pay attention to his father’s advice, to size people up within seconds and learn how to get along with them.

With his health improving every day, Chenault has hope for the future.

“I got some donations to rebuild my house, just about enough to start working on it,” he said. “Me and my dad built the house, and I hope to build it back.”

Chenault said he asks God to give him back his body and his strength so he can work another 20 years, “because in that 20 years I think I’m bound and determined to make enough money to build some storage units and leave it all to my kids so they can have some income to divide equally.”

And despite his two failed marriages, Chenault still believes in love.

“I got a girlfriend – Cherie, who I really care about,” he said with a smile in his eyes. “If I was going to marry anyone again, that’s who I’d marry.”

At this stage in his life, Chenault says he is still growing, and still changing for the better.

“I’m trying to be more like my dad now, more than anything. He was a good man and taught me so much and I’d like to make him happy. I know he’s watching me.” (La Semana)

Un comentario en "The life of a biker cowboy"