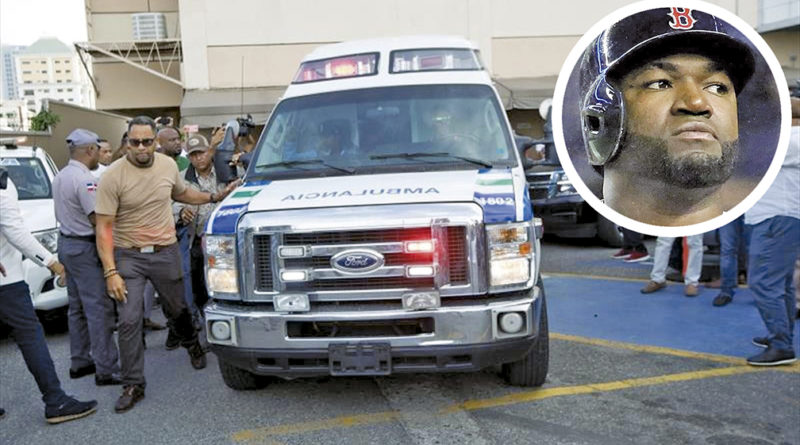 David Ortiz is receiving treatment at Massachusetts General Hospital in Boston after he was flown via medical helicopter from his native Dominican Republic, where the former Red Sox slugger was ambushed and shot.

The 43-year-old retired athlete arrived at Logan Airport at about 10 p.m. Monday after the flight was arranged by the Red Sox. From there, he was escorted by police to MGH, where he is being treated.

Doctors removed Ortiz’s gallbladder, intestines and moved the retired athlete affectionately known as Big Papi to intensive care, according to his spokesman, Leo Lopez. He is in serious but stable conditions, authorities said.

“We’re grateful to everyone who was on the scene last night who got David the care he needed,” Red Sox President Sam Kennedy said Monday during a press conference.

Support and well wishes almost immediately poured out for the Red Sox great as fans and colleagues shared words of encouragement for Ortiz. A moment of silence was held on Monday at Fenway Park for Big Papi before the Red Sox faced the Texas Rangers.

“It’s appropriate and expected that this community would rally around David when he needs us the most,” Kennedy said.

Lopez said Ortiz’s liver was damaged in the Sunday night shooting. An MGH doctor who spoke with NBC10 Boston said patients who suffer gunshot wounds to that region are typically able to recover.

Ortiz was at the Dial Bar and Lounge in Santo Domingo around 8:50 p.m. when the shooting happened, according to Dominican National Police Director Ney Aldrin Bautista Almonte. A gunman approached the baseball star from behind and shot him in his “lower back/abdominal region” at close range.

Ortiz was taken to the Abel Gonzalez clinic for surgery, where his condition was later listed as stable, according to Bautista.

A crowd at the bar beat the alleged gunman and held him until police arrived. Bautista said police are waiting until the man is treated for his injuries before questioning him.

Eliezer Salvador, who was at the scene, said the gunman said nothing, just fired once. Salvador then drove a wounded Ortiz to the hospital, telling reporters they had a brief conversation in the car as he urged the baseball great to stay calm and breathe.

“Do you have any problems with anyone?” Salvador recalled asking him, to which Ortiz replied: “No, my brother, I’ve never wronged anyone.”
Investigators are trying to determine whether Ortiz was the intended target, Bautista said.