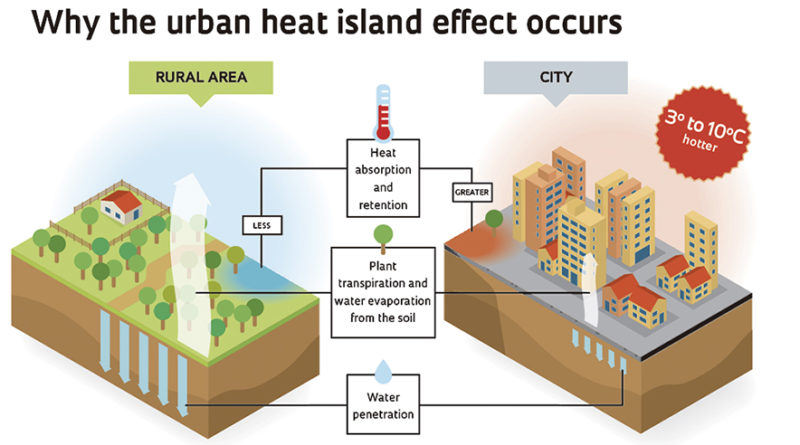 A NASA study found that in the summer months the temperature in New York was 4 degrees Celsius higher than average in the neighborhood.

Perhaps you have ever noticed the difference in the heat when you leave a park and enter a street flanked by tall buildings.

The road feels warmer and this change is a small example of the so-called “] Impact of the urban heat island “, a phenomenon that, according to Dr. Francesco Pomponi is an urgent challenge.

“The impact of the urban heat island occurs when the temperature in an urban center is higher than in the immediate vicinity,” said Francesco Pomponi, director of the Efficient Resources and Constructions Laboratory (REBEL), whose acronym was in English, opposite Nacier University in Edinburgh, Scotland.

“A study by NASA revealed that in the summer months the temperature in New York was on average 4 degrees Celsius higher than in the area.” Studies from the ’60s have already pointed to the phenomenon of the heat island, but the effect goes through Climate change more intense, “warned Pomponi Cities not only contribute to global warming, but can seriously affect the health of their inhabitants.

Why cities are hotter
Infinite rows of buildings do not favor the circulation of the breeze.

And dark materials such as asphalt and cement in the streets and roofs of houses retain more warmth than roofs of lighter colors, Dr. Dave said Pomponi.

On the other hand, the earth absorbs rain under natural conditions, which on hot days evaporates from the sun’s rays and is released for the atmosphere that refreshes the environment.

The lack of vegetation in the cities contributes to the heat island effect.
In the cities, however, the rain reaches the sewage system.
There are usually few trees in the urban centers.

” Vegetation plays a crucial role due to evapotranspiration .” The evaporation transports the heat from the ground-level areas upwards, and also transpires the plants, “said Pomponi,” on the other hand, the trend in recent decades has been to place more energy-intensive appliances in buildings Computers, refrigerators, printers that emit heat, which in turn places cooling systems that consume these they consume energy. It’s a vicious circle .

Another factor contributing to the temperature is that cars, buses, industry and other urban activities generate heat.

And the increase in heat is helping people to use more and more air conditioning In 2018, the heat island effect in Florida was responsible for an additional $ 400 million in annual air-conditioning expenditure.

Cities even produce their own clouds such as a study published this week by the University of Reading in England.

The study finds that the heat gradually dissipated by buildings affects air turbulence and transports moisture contributes to the cloud cover in urban centers being up to 10% higher than in the surrounding area.

The work reveals, according to Natalie Theeuwes, lead author of the study, “the growing impact cities have on their own mini-environments”.

What are the health effects?
Heat islands can aggravate the heatwaves generated by global warming, with fatal consequences.

In their report on climate change and health in February 2018, the World Health Organization warned that the temperature rise directly leads to deaths from cardiovascular and respiratory diseases, especially in the elderly.

The heatwave in 2003 saw more than 70,000 additional deaths, according to the WHO. Older people are one of the most heat-sensitive groups.

In the summer heat wave of 200 3 in Europe, for example, according to the WHO, there were more than 70,000 additional deaths .

Which cities can?
Scientists have already indicated what measures can be taken and some cities have heard the message.

“We have For example, at the local level the Cool Ro of Initiative or the New York Cool Ceiling Initiative (coolroofs.org)” said Pomponi.

“The use of clear or white roofing materials or, better, green roofs with transpired plants is a positive effect.”

What can Latin America do?
Pomponi has visited several cities in Latin America and believes that the cities of the region must “awaken” the challenge resulting from the intensification of climate change The island of heat from climate change. A first step is to protect and increase green areas both in its abundance in urban areas and in the density of trees,” said Dr. Pomponi. And a first step is to increase the green space. Also been shown that the color of surfaces has an influence.