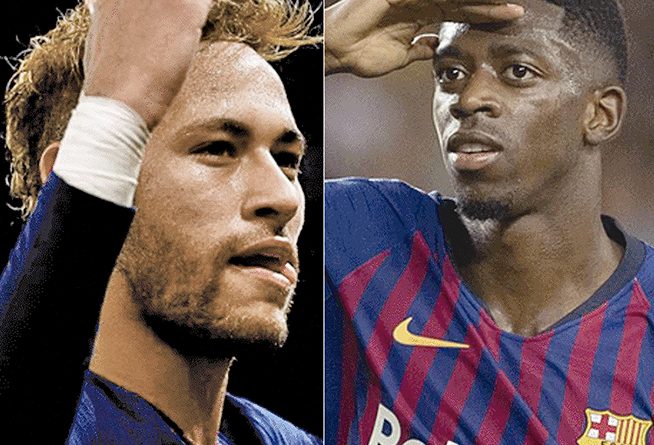 In a stunning development, Neymar could be returning to the Camp Nou as early as this summer.

Brazilian media giant Globo Esporte reported Monday afternoon that Barcelona is currently negotiating with Paris Saint-Germain over the signing of Neymar. According to the report, the deal could include a payment of around $112 million along with one or more players moving to Paris, including Ivan Rakitic, Ousmane Dembele and Samuel Umtiti.

There’s so many layers to this deal, so let’s break it down.

The news that Neymar could return to Barcelona comes on the heels of an interview by PSG president Nasser Al-Khelaifi and France Football, in which he called out Neymar, stating “nobody forced him to sign here,” and that Al-Khelaifi said earlier in the interview he didn’t want “to see stars anymore.”
“I want players willing to give everything to defend the honor of the jersey and to join the club project,” Al-Khelaifi told France Football. “Those who do not want, or do not understand, we see each other and we talk to each other. There are of course contracts to be respected, but the priority now is total membership of our project…nobody forced him to sign here. Nobody pushed him. He came knowingly to join a project.”

Meanwhile, Neymar has plenty of time now to think of his future. Ever since moving to PSG, it feels like he’s been stricken by the injury bug. While he’ll probably go down as a Brazil legend when he retires, he’s on the precipice of being a what if player, as in, what if he wasn’t injured for parts of the last two World Cups, and for picking up an ankle injury that’s kept him out of the 2019 Copa America.

It’s been ankle injuries as well in February of each of the last two seasons at PSG that has effectively ended his season just as it was reaching the important stages, the start of the UEFA Champions League knockout stage.

Remember, Neymar decided to force his way out of Barcelona and move to PSG in an effort to break the hegemony of Lionel Messi and Cristiano Ronaldo to win the Ballon d’Or and truly write his name in the history books.