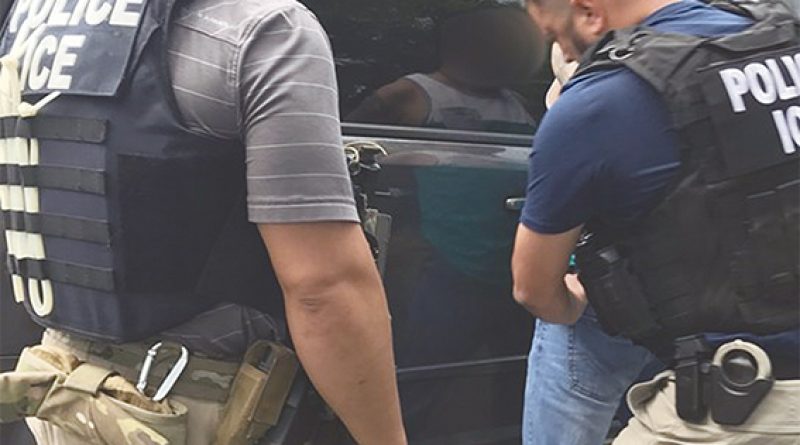 Late last week ICE (Immigration and Customs Enforcement) agents descended on several businesses in Oklahoma, including two Broken Arrow restaurants, arresting 24 individuals in the state in what appeared to be a preview of President Trump’s promised crackdown on immigration violators. An additional 52 were arrested in south and central Texas, and 51 others in north Texas.

ICE officers had been spotted in various parts of East Tulsa and Broken Arrow last week, with warnings popping up on social media urging undocumented residents to exercise caution and not draw attention to themselves.

ICE showed up at two restaurants in Broken Arrow, arresting at least nine individuals. The names have not been released, but reports on Fuerza Oklahoma TV showed five of those taken into custody as Camilo Bañales, 50, Juan Sifuentes Olvera, 42, Sergio Chavez Vasquez, 29, Dagoberto Diaz Lopez, and José Reyes Leal.

La Semana was unable to find any criminal charges against the five who were identified, which was confirmed when La Semana asked ICE spokesman Carl Rusnok if any of the men were wanted on felony warrants.
“These folks were administratively arrested on immigration violations,” Rusnok said.
Rusnok indicated that last week’s actions were not part of the enhanced raids Trump had promised would begin this past Sunday but later delayed for two weeks, describing the arrests as nothing out of the ordinary.

“24 arrests were made in Oklahoma,” Rusnok said. “However, this targeted enforcement operation is one that ICE does on a periodic basis. We also make targeted arrests on a daily basis.”

By targeted arrests, Rusnok is describing scenarios in which ICE is looking for particular individuals who either have criminal warrants or final orders of deportation. But at least one individual caught up in last week’s raids in Broken Arrow was simply in the wrong place at the wrong time. He had no outstanding warrants and was not on the agents’ list, but reportedly panicked when questioned, wound up arrested and now faces removal from the United States.

Immigrant advocates are urging those at risk to know their rights and not provide ICE with information that could be used against them. Information about your rights is available in Spanish at https://www.aclu.org/know-your-rights/derechos-de-los-inmigrantes. The document also is printed in this week’s edition of La Semana.

Even though Trump’s planned increase in immigration enforcement has been put off for the time being, it is clear from last week’s arrests that the presence of ICE will be seen more and more in the weeks and months ahead, and that agents can show up to your home or place of work at any time.

The best advice, according to those working to help the undocumented, is to stay calm but prepare for what might happen should you be detained. For those with children, this means having a power of attorney or guardianship arranged in advance so someone will be able to look after your kids should the worst happen. (La Semana)