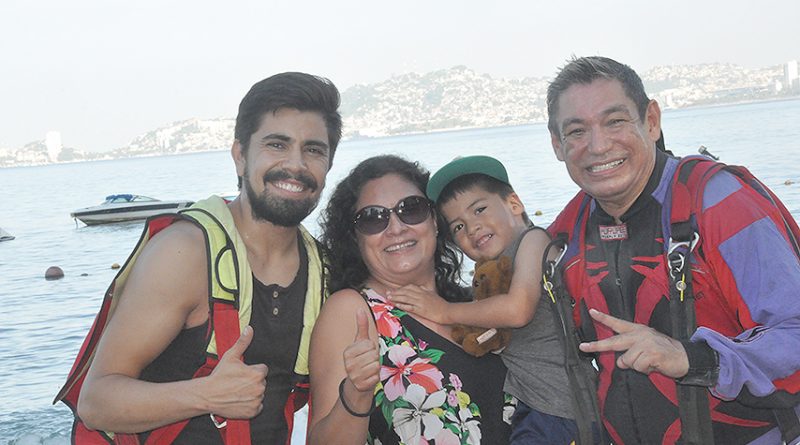 Base jumping is a high risk sport that consists on jumping from fixed elements, cliffs, bridges and buildings. In is probably one of the most dangerous sports in the world, practiced only by a few who dare challenge death. Mexico has over 120 million inhabitants and only five jumpers. La Semana was lucky to meet one of them, Johnny Saavedra, who still jumps at the age of 61.

“I have been jumping from planes for the last 43 years,” Johnny said with pride, “33 from fixed objects and during that time I only had three accidents, which is few in comparison to the amount of experience.”

The world of the jumpers is small, they all know each other, because, like Johnny says: “There are not many out there who want to jump from buildings. Some try, but then realize that it is a very expensive sport and that there is a tremendous risk to take into consideration, one that includes you and your family. It is not for everyone.”

Jumping is for the self, and unlike what most of us might think, base jumping professionals do not seek glory with each jump, they do not want publicity or to be a part of the Guinness records. Instead they do it to get a vision of the world that is only theirs to own, one that lasts but a few seconds and is breathtaking.

“This is a sport for yourself, you don’t do it to show off, you do it when nobody is paying attention,” Johnny said.

At the Acapulco bay, before abandoning the cliffs, the jumpers see something captivating, and know they are the only ones that can fly over the city and have a unique postcard in their minds.

“Only those who dare try know what it feels like,” stated the jumper.

Base jumping offered Johnny the opportunity of travelling to more than 30 countries, where he created strong friendships and unforgettable memories. Jumping has become a lifestyle, one that has given him a lot of lives in one: he has participated in movies and tried to be a movie star, he shot prestigious documentaries, made audacious commercials and had the chance to perform for kings and presidents.

“Without all of this my life would have lacked sense,” he mused.
Base jumping requires unique physical and mental techniques, but it also insists on strong logistical support to organize contingency plans for a possible catastrophe. Johnny is the father of four children and is very much aware of the responsibility behind each of his jumps, yet he doesn’t fear death because, in his words, “Life is a sigh that goes away without even noticing, which is why you need to live it as intensely as possible.”

Before jumping Johnny says to his wife “see you later,” thinking about positive things, about what he still wants to do.

“I’d rather die out there than in my bed,” he says confidently.

“This sport only lasts a few seconds, but for me those seconds are a lifetime, I have a deep sensation of pleasure, of satisfaction,” said one of the best 25 jumpers in the world.

Johnny loves jumping despite all of its risks, which he knows firsthand. Eight years ago, he crashed on a mountain and fractured both his legs, some ribs and even his skull. He hung for more than three hours from a cliff in Monterrey, almost bleeding to death when it was more than 39 degrees Celsius, before he was rescued by a helicopter. When he reached the hospital he suffered a heart attack and died for a few seconds, but that near-death experience, made him want to jump even more.

“At that moment I had my eyes closed, but I was completely aware of myself,” he recalled. “Suddenly I felt no pain and a white curtain opened in front of my eyes. There I felt joy, I felt peaceful, I cant describe the feeling… I wasn’t scared, and nothing stopped me, I had reached my destination.”

Johnny, added that he believes his body turned into pure energy, a part of something bigger. When he woke up after several seconds and the use of a defibrillator he screamed to the doctor, “Why, why did you bring me back?”Johnny had realized then that life hurts too much.

Even if he almost died practicing base jumping, Johnny believes that his life, the stories he can tell, his memories and his freedom are what counts and what make him keep on jumping. That is why he advises all those amateur sportsmen out there to make a living out of their real passions and pleasures.

“Don’t follow false mirages, do what you have to do for the real reasons, forget about vanity, courage or pride, be authentic.” (La Semana)