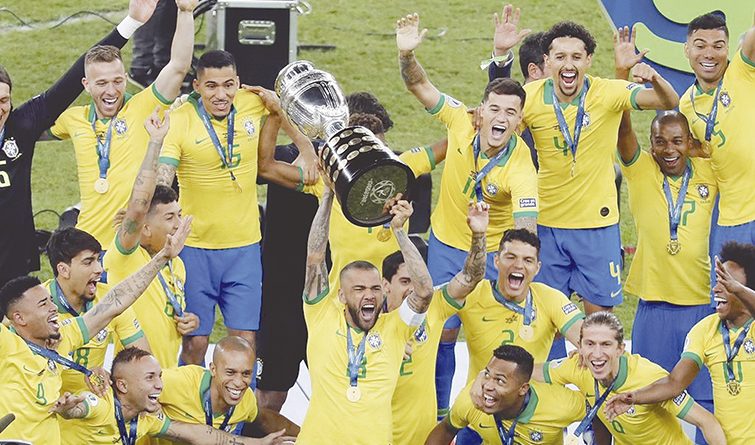 Everton, Jesus and Richarlison with the goals

In their home Copa America, Brazil have won the South American tournament to proclaim themselves as the best footballing nation in the continent for the first time since 2007.

They did so with a 3-1 victory over Peru in the Maracana, with the goals coming from Everton, Gabriel Jesus and Richarlison to deem Paolo Guerrero’s penalty kick redundant.

Jesus was also sent off in the second half with the score at 2-1, but the Selecao actually extended their lead before the final whistle.

Peru surprised many with their purposeful and offensive start to the match, but the home side weathered that early storm and took their first lead of the night in the 15th minute as Everton lost his markers and met a cross from Jesus, who’d done brilliantly well on the wing to get a ball into the box.

Roberto Firmino almost added a second with a header that flew just over the crossbar, but Peru then won a penalty for a Thiago Silva handball and Guerrero was able to tie the game up at 1-1 just before the break. Yet Brazil went in with a lead as they almost immediately retook the advantage, with Jesus finishing excellently after Arthur had driven forward and offloaded the ball at just the right time.

Peru caused Brazil more problems in the second half, especially after Jesus was sent off in the 70th minute for a second yellow card as Miguel Trauco and Edison Flores came close.

Yet Brazil weren’t in the mood to concede a second goal of the tournament and ground out the victory, even adding a late celebratory third as Richarlison scored from the spot following a foul on Everton. Peru did much better than their 5-0 loss to the same opponent in the group stages, but it wasn’t enough to win their first tournament since 1975.Instead, Brazil are celebrating tonight in the Maracana and beyond.