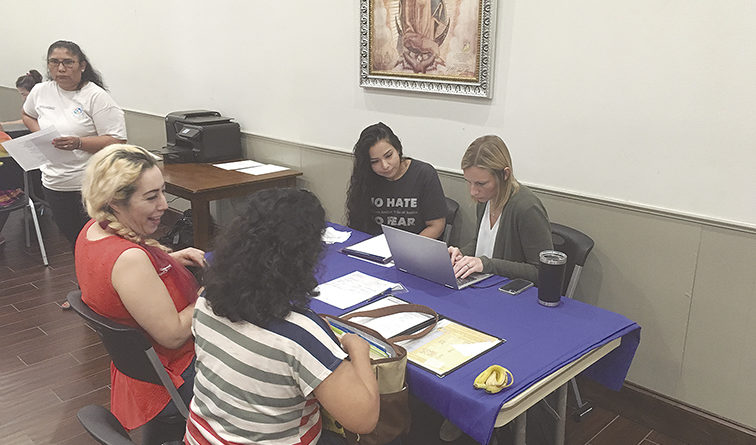 A power of attorney event for undocumented parents was held last weekend at St. Thomas More church hall. The free event was designed to give parents who have immigration status issues peace of mind by ensuring that an adult family member or friend would have the authority to take care of their children should the worst happen and one or both parents be detained or deported.

“With all the news recently about ICE raids and families being targeted for deportation, it’s understandable that there is a level of anxiety in the immigrant community,” said Blanca Zavala, president of the Coalition for the American Dream (ADC), which organized the event. “However, we are urging the community to stay calm and go about their lives, but also to take steps to protect their families, just in case. The power of attorney documents can help with this.”

The power of attorney document gives one or more adults the legal ability to enroll children in school, obtain medical care for them, and other routine duties normally requiring parental authorization. They are not the same as full legal guardianships, but do allow someone to stand in for absent parents for a year.

Several attorneys volunteered their time for this cause, including Chris Bell, Eddie Erwin, Elizabeth Chronos, and Kate Vetterick. Bell, Erwin, and Chronos are in private practice, and Vetterick is Immigration Program Manager at YWCA Tulsa’s Immigrant and Refugee Services.

Notaries Irena Cheveleva, Maricela Luna, and Monica Rubio from the YWCA also donated their time and talents, as did Irma Chajecki, Blanca Willis, and Guillermo Rojas. UNIDOS volunteers Yadira McCoy Paz, Xareni Quijada, Griselda Martínez, Dowing Paz, and Walter Ernesto Oquioma helped with interpretation and keeping the flow of families organized.
More than 60 families were served at last weekend’s event, which Zavala said will be repeated in the near future.

“There are still a lot of worried families in Tulsa, and we’re going to do all we can to help them,” she said, adding a special thanks to all those who volunteered their time and efforts. “From the bottom of my heart I thank all the volunteers, and Father Briones for hosting us. We could not do this without a group effort.” (La Semana)