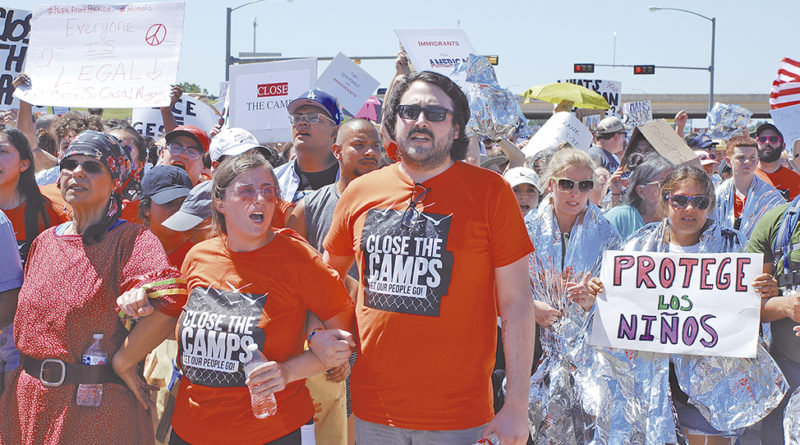 A large crowd of at least 500 demonstrators gathered at the gate of Fort Sill in Lawton, Oklahoma last Saturday to protest the planned detention of migrant children at the US Army post there. As the Trump administration’s crackdown at the southern border has filled detention centers to beyond capacity, parts of several US Army bases, including Oklahoma’s Fort Sill, are being converted to house minors being detained by the government.

Different groups from Tulsa, Oklahoma City, Dallas, Wichita, and New Mexico arrived on busses to join the protest, which included some activists from as far away as New York.

Tulsan Bruce Niemi of the Coalition for the American Dream (ADC) was among those attending the rally and march, which he described as “a sweltering walk in the hot sun.”

The near 100 degree temperature did not dissuade the hundreds of those who came out to raise their voices in opposition not so much to the specific use of Ft. Sill for this purpose, but against the Trump administration’s draconian anti-immigrant policy many feel has led to the current humanitarian crisis.

“Activists, moms, dads and even babies in strollers took part in the march, blocking traffic on the main highway through Lawton,” Niemi told La Semana. “The protesters were calm and nonplussed by a lone Trump counter protester as they donned foil blankets such as those issued to refugee children in US ‘concentration camps.’”

Niemi pointed out that this isn’t the first time that Ft. Sill has been used to incarcerate innocent people. In 1896, Native American tribal members were sequestered at the camp, and in 1942, Japanese Americans from the Pacific Coast were detained there throughout World War II, some of whom were reportedly shot by Ft. Sill soldiers. In 2014 the Obama administration also used the fort to house migrant children during that period’s unprecedent wave of unaccompanied minors seeking asylum.

“Now today, CBP [Customs and Border Patrol] will be holding Latin American children seeking a better life away from tyranny, war and nefarious gangs there pending adjudication of their asylum claims,” Niemi said.

Protesters sought shelter from the sun underneath an overpass while listening to Japanese Americans, tribal leaders, and Buddhist clergy speak about injustices past and present.

Niemi said there were no conflicts with local law enforcement and the peaceful protest lasted about an hour. (La Semana)