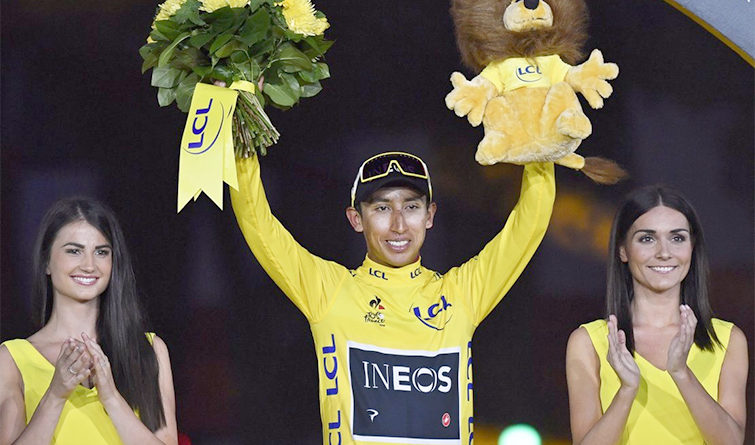 On the Champs-Elysees fittingly bathed in the yellow of a golden dusk, a Tour de France for the ages crowned a champion of an unusually young age on Sunday: 22-year-old Egan Bernal, South America’s first winner of cycling’s greatest race.

“I cannot believe it. It’s just incredible. I am sorry. I have no words,” Bernal said through a translator. “I still can’t understand what is happening to me.”

The youngest champion of the post-World War II era, the slightly built Colombian with a killer instinct on the road, proved to be the strongest of the 176 strong men who roared off from the start in Brussels, Belgium, on July 6 on their 3,366-kilometer (2,092-mile) odyssey that delivered the most absorbing, drama-packed Tour in decades and a new cycling superstar in the making: Bernal.

Riding a yellow bike, and cheered by Colombian fans who were partying even before he sped up the famous avenue, Bernal crossed the line with his teammate Geraint Thomas, the 2018 champion who this year finished second. Steven Kruijswijk completed what Tour organizers said was the tightest podium in the 116-year history of the race, with just 1 minute, 31 seconds separating the first and third places after three weeks of racing.

The 21st and final stage was won in a sprint finish on the Champs-Elysees by Australian Caleb Ewan, the dominant sprinter of this Tour with three stage wins. Keeping with race tradition on its final day, the 155 riders who survived the Tour rode at a pedestrian pace and in a joyful atmosphere before hitting the Champs-Elysees. Bernal chatted with French rival Julian Alaphilippe and raised a glass of champagne as he rode.

The setting sun turned the avenue golden as Bernal and the pack sped on its cobblestones to the finish, where Bernal fell into the arms of his family.
Speaking in French before the start, Bernal thanked “France for organizing the most beautiful race in the world, and the most beautiful victory of my life.”

While Colombia celebrated its new national hero, the millions of French fans who had lined the roads through east, central and southern France, and up into the thinning air of the Pyrenees and Alps, were ruing a bitter-sweet Tour.

First, their hearts soared with fabulous racing from French riders Alaphilippe, who held the iconic yellow jersey for 14 days, and Thibaut Pinot, who won on the first of seven 2,000-meter-plus (6,500-feet) peaks scaled by the highest Tour in history.

But joy turned to sorrow when Alaphilippe and Pinot’s prospects of becoming France’s first winner since 1985 were cruelly dashed just two days before the grand finale in Paris, on an epic Stage 19 where Mother Nature became a party-pooping guest. An almighty dump of torrential rain and hail severed the Tour route just as Bernal was succeeding in ripping the race lead off Alaphilippe, who’d clung to it like a kid with a favorite toy.