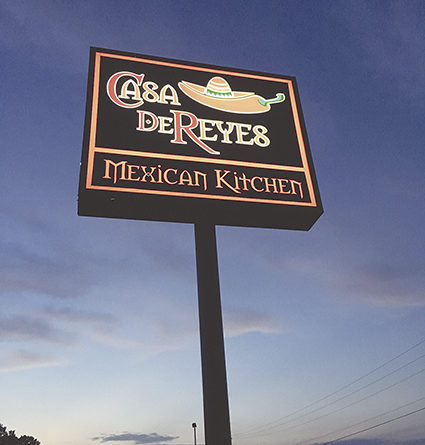 There’s a new place to satisfy your craving for Mexican cuisine in Broken Arrow. Casa de Reyes Mexican Kitchen this week celebrated its grand opening, and the brightly colored restaurant located just off the Broken Arrow expressway at 9050 South OK-51 was packed with happy, hungry diners.

Case de Reyes is the latest venture from the husband and wife team Martin and Veronica Reyes, who also own the popular Fiesta Mambo restaurant in Broken Arrow’s Rose District. Martin said that friends and family had encouraged him to open a second restaurant, and so Casa de Reyes was born.

From the moment guests walk in the front door, they are immersed in Casa de Reyes’ festive family atmosphere. The restaurant is bright, spotlessly clean, and welcomes first time customers as well as old friends from Fiesta Mambo.

Casa de Reyes has an extensive menu featuring numerous classic dishes from Martin’s native Mexico as well as the occasional tip of the hat to Argentina, where Veronica was born.

Street tacos are among Martin’s favorites, but it’s hard to choose from such plates as Mexican Carne Asada, Enchiladas del Mar, Ensalada de Camaron, Enchiladas Aztecas, Mole de Pollo, and so many more.

Casa de Reyes has a full bar and plenty of restaurant seating, as well as a spacious patio in front that will no doubt prove very popular once the Oklahoma summer temperatures drop just a little.

Martin and Veronica have high hopes for their new restaurant, and Martin gives most of the credit to God, “for all the blessings that made Casa de Reyes possible.” He is also quick to thank the many family members and friends who have encouraged him along the way.

Casa de Reyes Mexican Kitchen is open Monday, Tuesday, and Wednesday from 11am – 9pm, and Thursday, Friday, and Saturday from 11am – 10pm. The restaurant is closed on Sunday. (La Semana)