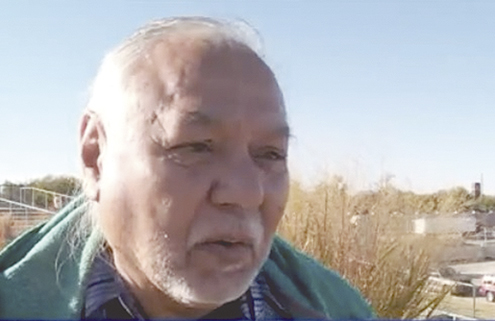 At 75 years of age, Roberto Mendoza is at a time in life when most people are content to look back on their past with nostalgia, letting others do the heavy lifting and worry about shaping the future.

But not him. Mendoza, a tireless social activist and filmmaker who has championed a number of Native American and migrant issues, has a story to tell, and he isn’t about to rest until he’s shared his vision with the world.
The story has been dancing around in Mendoza’s head for years, based in part on factual events and on people he’s met during his life’s journey. It’s a tale that focuses on people from two disenfranchised groups in this country, the homeless and the undocumented.

“They both live in the shadows, and the first title I had was ‘Lost in the shadows,’” Mendoza told La Semana. “First I wrote the script as a short film, but it got longer and longer and turned into a feature length film.”
Mendoza said that early versions of the script “were kind of bleak and dark, but it changed,” he explained, “I decided to add some characters that brought a sense of hope.”

The lead character is an Iraq war veteran who carries the weight of things he did while in the military and, like so many American veterans, loses his family and his home as a result. Homeless and living in Tulsa, the man meets a young woman, an undocumented Latina, who confronts the racist attacks of Neo-Nazi meth addicts while dodging police to avoid deportation. We won’t reveal all of the story here, except to say that unbeknownst to the veteran, there is a personal connection to the woman that he won’t learn until after a needless tragedy has occurred. The story touches the lives of those of different races and backgrounds, and has a timeliness underscored by the resurgence of bigotry in America today.

Mendoza says he will need to raise at least $50,000 to make the film, which he plans to shoot in Oklahoma. He is launching a crowd-funding initiative with the hope raising enough to shoot two or three scenes, which he can then show to investors to try to secure the balance. He would like to see the story on the big screen, but said he can probably reach more people on a platform like Netflix.

Mendoza often employs his talents in the interests of social justice, and was recently involved documenting protests against using Ft. Sill in Lawton, Oklahoma as a detention camp for migrant children. He believes the hatred and bigotry seen with alarming frequency in this country is in no small part emboldened by the racist words of Donald Trump, and in this film he cautions that such evil can spread beyond its initial targets.

“I want to warn people that the rise of fascism and the rise of racism is especially threatening to people of color, but eventually will threaten everybody,” Mendoza said. “We need to get together to stop this and to protect ourselves.”

Mendoza hopes the message he will impart through the film is ultimately one of hope, and of the power of people of different backgrounds to come together and work for the common good.

As can be seen both in his script and through the example of his life, Mendoza embraces a simple but powerful truth: “You can accomplish social change if you get together.” (La Semana)