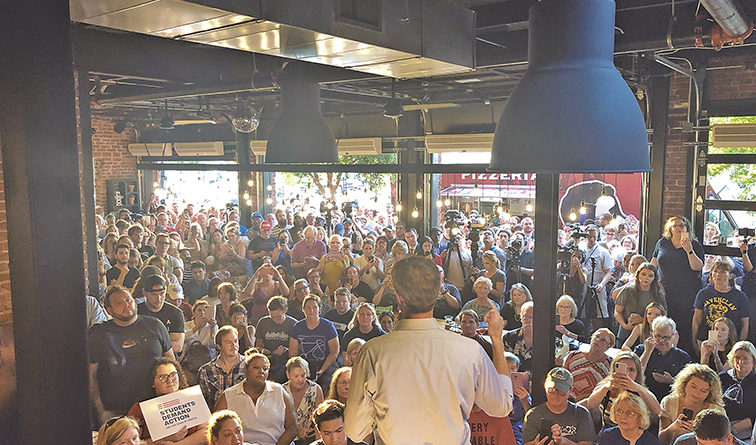 Democratic presidential candidate Beto O’Rourke was in Oklahoma this week, speaking to crowds in Tulsa and Oklahoma City.

At a rally at Tulsa’s Welltown Brewing, O’Rourke told a crowd that spilled out into the streets that the United States was founded not on any concept of common race or ethnicity, but on the ideal the all people are created equal.

O’Rourke condemned the recent gun violence in his native El Paso and praised the contributions immigrants have made and continue to make to the culture and economy of the United States. The former Texas congressman, who is ranked 6th in a field of more than 20 Democratic presidential hopefuls in a recent CNN poll, laid the blame for the climate of racism he said is partly responsible for the El Paso killings at the feed of the president. O’Rourke said Trump’s words have consequences, and urged the nation to reject the politics of division and hatred.

“It is not enough not to be racist,” O’Rourke said. “We have to be anti-racist. We have to shut down white supremacy, domestic terrorism, and white nationalism.”

“After the Tulsa Race Massacre, evidence was destroyed, memories were suppressed, the past was covered up,” the candidate said. “But we must never forget Greenwood’s resilience, because it’s an example for all of us of how to respond to darkness with defiance.”

O’Rourke later travelled to Oklahoma City, where he visited the memorial dedicated to the victims of the 1995 Oklahoma City bombing.

“White nationalism and domestic terrorism are not a relic of the past, they still threaten us today—in El Paso and in communities across America,” he said. “Following Oklahoma City’s perseverance, we will overcome hate everywhere it lives, including in the White House.”

During his Oklahoma appearances, O’Rourke spoke about the need for greater access to health care – which is particularly bad problem in Oklahoma, and about historic and ongoing persecution of Native Americans.

Before wrapping up his Oklahoma visit, O’Rourke thanked the state for the warmth of his reception here.

“Not often does a Texan feel at home in Sooner country,” he said. “Great being back in Oklahoma these past two days. See you again soon.” (La Semana)