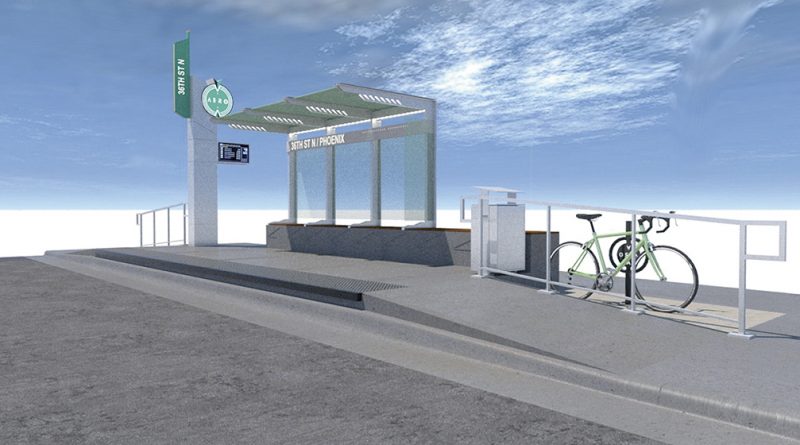 After several months of construction, the first completed station for the new Aero Bus Rapid Transit (BRT) system was revealed to the public this week. Located at Peoria and Apache, the new station is one of many that Tulsa residents will soon see along the city’s first BRT route, which will run along Peoria Avenue from 54th Street North to 81st Street South.

Liann Alfaro, planning and marketing director with Tulsa Transit, told La Semana that the 18-mile Peoria Aero route will begin in late fall or early winter of this year.

Alfaro said the Aero bus, which stops only every mile, promises to get riders along this busy route to their destinations much faster than the existing buses.

Alfaro said she hopes the growing number of Hispanics living and working along the bus route will take advantage of the extended hours and faster service.

“All are welcome,” Alfaro said, noting that several of the drivers are bilingual, and Tulsa Transit’s call center also has Spanish speaking staff.

“We definitely would love to have the Hispanic community come and check it out,” she said, “and just let others know that your Tulsa Transit is a great option for transportation.”

Alfaro dispelled rumors that riders would ever have to show identification or residency documents, and pointed out that for those unable to drive Tulsa Transit is a safe and reliable choice.

And while it will get you to your destination a lot faster, Aero BRT won’t cost you a penny more in bus fare.

Tulsa Transit said that Aero BRT will feature modern buses and comfortable stations, and amenities at each station will include sheltered seating, bicycle racks, level boarding, onboard WiFi, and real-time arrival signs.