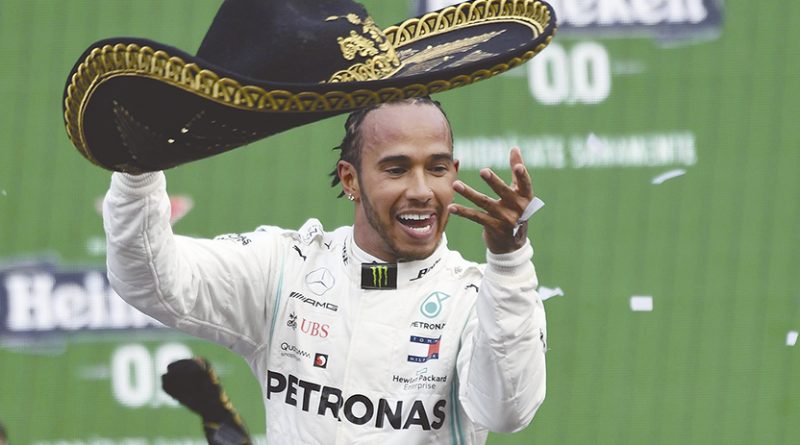 Lewis Hamilton will have to wait one race longer to surpass the great Juan Manuel Fangio and become a six-time world champion on his own despite winning the Mexican Grand Prix from Sebastian Vettel and teammate Valtteri Bottas.

Victory marked a 100th grand prix win for Mercedes as a constructor and Hamilton was quick to acknowledge the hard work of his team.

“What a job guys, thank you so much for all your hard work,” said Hamilton over the radio after taking the chequered flag. “That was a tough race but stuck in there. Fantastic job. Thank you everyone for all your support as always. That was for Bono.”

Starting from a promoted third on the grid following Max Verstappen’s demotion for not slowing under yellow flags in qualifying, Hamilton tangled with the Dutchman at the start having been pushed wide by Sebastian Vettel, the Red Bull having to go over the grass before re-joining in in eighth.

It would soon go from bad to worse for Verstappen, a left rear puncture forcing an early pit stop and effectively ending his chances of victory. His misfortune was to be Hamilton’s gain, the Englishman pitting on lap 24 on a one-stop strategy to take him to the end of the race, the Ferrari duo on alternative strategies.

But Hamilton immediately reported his hard tyres going off, reporting over the radio “it feels like we stopped way too early,” only six laps after changing his rubber.

Bottas made his one and only stop on lap 37 with Vettel following him a lap later. And with race leader Leclerc making his second stop for hard tyres on lap 44, but losing four seconds for a slow stop for a right rear problem, it made for an intriguing finish.

And with Hamilton’s tyres losing grip and Vettel closing to within a couple of seconds with a handful of laps remaining, it looked as if the Ferrari may yet be able to catch up. But Hamilton is a masterful front runner, and with the ultimate goal firmly within his sights, he was not to be denied.

“Firstly, I have to applaud this incredible crowd,” added Hamilton after stepping from the car and talking to former teammate Jenson Button. “This is the best crowd I’ve ever seen. I’ve never seen anything like this. Today is an incredible result. I have to say a huge thanks to my team, my Mercedes partners here, the guys who continue to work incredibly hard and stay focused.

“We came here thinking we were on the back foot, knowing that it’s a difficult race for us but we pulled through. I had quite a bit of damage on my car so the race was quite a bit of a struggle. But I kept my head down and it seemed like a long second stint but I feel grateful for today.”

The win means that Hamilton will almost certainly clinch a sixth drivers’ title in Austin, Texas in a week’s time – an achievement that would put him just one title away from all-time leader Michael Schumacher. But it’s not something that Hamilton will allow himself to think about just yet as he savours a first win in Mexico.