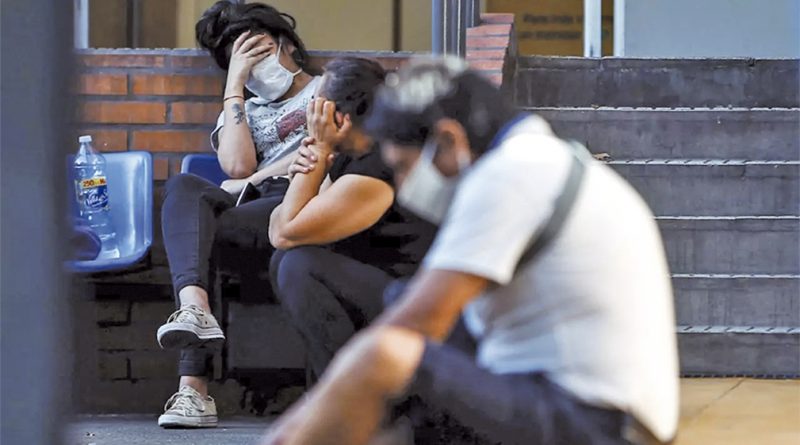 Over 16.4 million recoveries and 842,000 deaths reported; US, Brazil and India report highest number of infections.

Global coronavirus cases surged past 25 million, according to a Johns Hopkins University’s tally, as deaths exceed 843,000. More than 16.4 million have recovered.

Every Italian region reported new coronavirus cases after a record 99,000 tests turned up another 1,444 cases.

In a statement Sunday, the national command and control center said only four people died from the new virus in the previous 24 hours, taking overall COVID-19 deaths to 6,288 since the start of the outbreak in February.

However, health officials are still trying to understand the reason for a steady decline in infections in Pakistan, which witnessed twin peaks in June when daily confirmed cases reached up to 6,825.

It was then when hospitals were full amid shortage of medicine, oxygen and ventilators, and even face masks were not easily available.

The country’s total number of confirmed infections now stands at 1,966, with 15 deaths, since the first case surfaced in early March, according to the health ministry.

Jordan has seen a jump in daily numbers over the last 10 days, prompting authorities to toughen a nationwide overnight curfew, which now starts at 11pm rather than 1am, and to introduce a one-day lockdown in the capital Amman on Friday.

Officials have also delayed the resumption of regular commercial flights from Alia international airport, which was expected to happen this month, hampering prospects of a rapid recovery for its debt-burdened economy.

The health ministry said the cumulative number of COVID-19 deaths rose to 30,606 from 30,602 reported on Saturday.

“In mainland France, the progression of the COVID-19 epidemic is exponential. The strong growth dynamics of transmission is very worrying.” the ministry said in a statement.

16:13 GMT – Zante flight to Cardiff told to self isolate after cases found
Passengers who were on a flight last week from the Greek island of Zakynthos to Cardiff in Wales have been told to isolate after it was identified as the source of at least seven confirmed coronavirus cases, Public Health Wales said.

“Cardiff and Vale Test Trace Protect and Public Health Wales have identified at least seven confirmed cases of COVID-19 from three different parties who were infectious on TUI Flight 6215 from Zante to Cardiff on 25 August,” said Giri Shankar, incident director for the coronavirus outbreak response at Public Health Wales.

“As a result, we are advising that all passengers on this flight are considered close contacts and must self-isolate,” he said in a statement.

Shankar added that investigations had found that the virus had spread to other groups of people because of “a lack of social distancing, in particular by a minority of the 20-30 year age group”.

15:06 GMT – Britain records 1,715 new cases
The United Kingdom reported 1,715 new coronavirus cases in the last 24 hours, up 607 cases from the day before, according to government data.

One person had died after they tested positive for the disease within 28 days, it said.

Finance minister Olaf Scholz, of the Social Democrats, the junior partner in Angela Merkel’s conservative-led ruling coalition and candidate to succeed her as chancellor, said Germans must do everything possible to prevent such scenes.

“It is unacceptable that some now appear in front of the Bundestag building, the Reichstag building, the most important symbol of our democracy, the parliament, with symbols from a bad dark past, flags that have nothing to do with our modern democracy,” Scholz told journalists at a brief news conference outside his party’s headquarters in central Berlin.

Scholz’s comments were echoed by politicians including German President Frank-Walter Steinmeier and the chair of Merkel’s Christian Democrats, Annegret Kramp-Karrenbauer.

Lagos, the epicentre of the pandemic in Nigeria, plans to reopen colleges on September 14, and primary and secondary school schools on September 21, Babajide Sanwo-Olu said.

“The gradual easing doesn’t mean the pandemic is over,” he said in a tweet. “It is not an invitation to carelessness or nonchalance.”

The Lagos governor said restaurants, social clubs and recreational centers would also be allowed to reopen as long as they followed safety rules.

Hello, this is Farah Najjar taking over from my colleague Umut Uras.

Stephen Hahn, who serves as the commissioner of FDA, said his agency was prepared to authorise a vaccine before phase three clinical trials were complete, the paper reported

A more infectious mutation of the new coronavirus has been found in Indonesia, the Jakarta-based Eijkman Institute for Molecular Biology said.

Indonesia reported 2,858 new infections on Sunday, data by the health ministry showed, below the previous day’s record 3,308 but above the past month’s daily average. Its total number of cases was 172,053, with 7,343 COVID-19 fatalities.

The “infectious but milder” D614G mutation of the virus has been found in genome-sequencing data from samples collected by the institute, deputy director Herawati Sudoyo told the Reuters news agency, adding that more study is required to determine whether that was behind the recent rise in cases.

The strain, which the World Health Organization said was identified in February and has been circulating in Europe and the Americas, has also been found in neighbouring Singapore and Malaysia.

The university’s running data showed that global confirmed COVID-19 infections stood at 25,009,739 and the number of recoveries had reached 16,411,400.

India’s single-day tally of 78,761 new coronavirus infections on Sunday exceeded the one-day increase of 77,299 reported by the US in mid-July.

Tax hikes suggested by Treasury officials could raise an extra 20-30 billion pounds a year, the Telegraph and the Sunday Times reported, and some of them could be announced in an autumn budget statement by Sunak. However, officials working for Prime Minister Boris Johnson are fiercely opposed to a major tax raid on wealthier voters and want to consider spending cuts instead, the Telegraph said.

Britain’s public debt has passed two trillion pounds ($2.7 trillion), pushed up by emergency spending on Sunak’s coronavirus job retention scheme, tax cuts for businesses and consumers and even a dining-out subsidy to coax people back into restaurants.

Prime Minister Boris Johnson’s government has come under fire over its moves to restart education, especially after a row over exam results for school students and a failed attempt to bring all pupils back to their classes earlier this year.

President Jair Bolsonaro has previously stated that the aid payments, which are due to expire this month, will be renewed through the end of the year. However, a planned announcement last Tuesday was delayed after disagreements about the form of future aid payments and related benefits arose between the Economy Ministry and Bolsonaro.

Authorities said 68 people had died of COVID-19 over the last 24 hours, raising the official death toll to 17,093

The government has said the real number of infected people is likely significantly higher than the confirmed cases.

There were 299 new infections as of Saturday midnight, the slowest daily rise in five days, bringing the national tally to 19,699 cases of the new coronavirus and 323 COVID-19 deaths, the Korea Centers for Disease Control and Prevention (KCDC) said.

Dr Thiravat Hemachudha, head of the Thai Red Cross Emerging Infectious Disease Health Science Centre, said that the latest vaccine is produced by integrating the virus’s DNA into tobacco leaves. The plant responds to the DNA and produces proteins about a week later, according to a report in the Bangkok Post.

The proteins are then extracted to make the vaccine. So far, it has been tested on mice and monkeys. The next step is testing it on humans.

“This vaccine, made with proteins from a special type of tobacco leaf, is easy and cheap to produce, even at an industrial scale. Also, there will be no patent-related problems with this approach,” he was quoted by the Bangkok Post as saying.

Brazil’s Ministry of Health has reported at least 758 additional coronavirus fatalities during the last 24 hours, with 41,350 new cases, bringing the death toll to 120,262, and the confirmed number of cases to 3,846,153.

Brazil is the second-hardest-hit country by COVID-19 after the United States, both in fatalities and infections. The country, however, reported a slowdown in the number of new cases and deaths.

Italy has nearly doubled its daily tests this month amid a surge in new infections, mostly among young people returning from holidays.
by Umut Uras, Farah Najjar & Ted Regencia