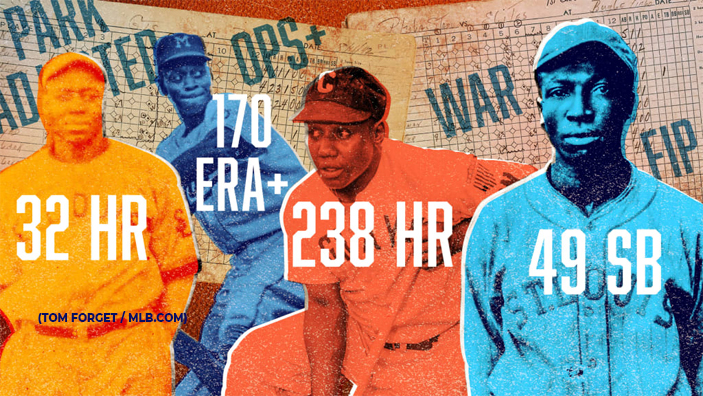 A version of this story was first published in November, 2020, a few weeks before MLB announced that Negro League stats were being made part of the official record. The text below has been updated to reflect that.

You know the names: Satchel Paige. Josh Gibson. Turkey Stearnes. You know their stories, like how Paige once told his outfielders to sit down while he struck out the side. How Cool Papa Bell was so fast that he could hit the light switch and be in bed before the lights went out. But you don’t know their numbers — at least, not with the same devotion baseball fans have to statistics like Ted Williams’ .406 batting average or Hank Aaron’s 755 home runs.

But there are a group of researchers led by Gary Ashwill who are looking to change that.

Over at the Seamheads Negro Leagues database, a dedicated few have combed through newspapers and scorebooks, photo albums and microfiche to piece together the most complete statistical record of the Negro Leagues to date.

For example, here, courtesy of Ashwill, are the pages from a 1941-42 Baltimore Elite Giants scorebook showing the Elites beating the Philadelphia Stars on Aug. 16, 1942:

“The biggest myth of them all is that the history of Negro League baseball is nothing but blurry, hard-to-substantiate legends and tall tales,” Ashwill wrote in an email to MLB.com. “I grew up with the distinct impression that no statistics could ever be compiled, that it was often unclear what happened at all, and that it was more or less impossible to find out anything for sure about many of the players.”
That started to change in the 1980s and early ‘90s as researchers like Dick Clark, Larry Lester, John Holway, James Riley and Phil Dixon began assembling a more robust statistical record. That mission continues today.

And I really do mean today. When I began speaking with Ashwill about the database in September, Hall of Fame slugger Mule Suttles held the Negro Leagues’ single-season home run record with the 30 that he hit as a member of the St. Louis Stars in 1926. Just this month, and nearly 80 years after Suttles’ career ended, Ashwill was able to add two more home runs to his tally, bringing his total to 32.

“Basically, our earlier version of the 1926 Negro National League relied heavily on the Black weekly newspapers for games played in St. Louis — in this case the Chicago Defender (which was distributed nationally) and the St. Louis Argus,” Ashwill wrote. “While the weeklies tried to cover every game they could, deadlines and limited space meant they often had to leave out a few games. For our latest update I checked through the mainstream daily newspapers in St. Louis and picked up three more St. Louis Stars games — and Suttles homered in two of them.”

That’s the type of work that Ashwill, who currently works as a freelance academic editor and runs the Agate Type baseball blog, has done since he began researching the Negro Leagues 20 years ago. After spotting the Black newspaper The Chicago Defender in his university’s library stacks and knowing its historical importance, he dove into the reels for the 1920 season and was surprised to see incredibly thorough coverage and box scores for the Negro National League.

From there, he “started collecting box scores and compiling statistics pretty much right away,” Ashwill said. Soon he became involved in the Negro League Researchers and Authors Group and helped with an extensive study commissioned by the Hall of Fame and Major League Baseball. He continued his research with others like Kevin Johnson, Dan Hirsch, and Scott Simkus. Eventually, these two groups joined forces to create one comprehensive database.

“I have always been drawn to blank spaces on maps, blank spaces in record books,” Ashwill said. “It was this sense of mystery combined with an increasing confidence that in fact all kinds of evidence was there to be found. The color line in baseball is also probably the most profound case of historical injustice in the history of modern sports — and the injustice most definitely includes the failure to properly record both the identities and the achievements of thousands of professional ballplayers.”

Before the Seamheads database, Negro League statistics were sparse and spottily updated. Part of that was simply how the Negro Leagues recorded their statistics, which wasn’t as robust a system as the Major Leagues’. There are a variety of reasons for that, Ashwill said, including a “lack of capital and other resources, looser organization and less of a press infrastructure covering them.”

The other is that sources like the Macmillan Baseball Encyclopedia — which basically set the standard for baseball statistics when it was released in 1969 — wasn’t all that invested in featuring Negro League records. When the book was being put together, the Negro Leagues weren’t even considered for inclusion.

The Encyclopedia and various books and projects over the years “printed stats for a selection of Negro League stars,” Ashwill explained — picking and choosing what information to present, and often excluding players who appeared in fewer than 10 games. They also decided not to count the interleague games “which were an important part of Negro League seasons, especially in the 1940s.” (Though many seasons featured approximately 50 league games, “Negro League teams played 150-175 games a year overall — the rest of the schedule being filled up with games against white semi-pro teams, lower-level Minor Leaguers, minor Black teams, and other teams whose games we haven’t counted yet,” Ashwill explained.)

If history belongs to the record keepers, then these record keepers weren’t interested. Fortunately, that has recently changed with the recognition of the Negro Leagues as a Major League, but for decades that wasn’t the case.

“A lot of the earlier versions of Negro league statistics only gave you batting averages, home runs, pitchers’ won-lost records, basic stuff,” Ashwill said. “I always really, really wanted to get the full workup for those guys — walks, on-base percentage, fielding stats, home runs allowed by pitchers — so you could tell what kind of players they were, how they fit into their teams, how the teams compared to each other. I wanted to see them as flesh and blood people, real players who had the same kinds of complex profiles we have for players today. Just having a few stories here and there was not remotely enough. I read Bill James in the 1980s, and I wanted a Negro League Baseball Abstract. In fact, that’s my long-term goal: to write a Negro League Baseball Abstract. But you’ve got to establish a basic record first.”

That means it’s taken countless hours of research to fill in the gaps and put together the database. It’s also why there are always new updates.

“Our statistics are based on box scores and game stories found in contemporary newspapers, as well as the small number of scorebooks and filled-in scorecards that can be tracked down,” Ashwill wrote. “The most important sources are the Black weekly newspapers (Chicago Defender, Pittsburgh Courier, Baltimore Afro-American, Kansas City Call, etc.) and daily newspapers in cities where games were played. You go through the most important sources for a given year, collect the box scores, construct a schedule, go back and try to fill in gaps, double and triple check everything, then type in the games.”

Suttles’ home run record isn’t the only record they’ve discovered. They’ve established — though it’s no surprise — that the speedy Bell holds the single-season record with 49 stolen bases for the Stars in 1929. Josh Gibson holds the all-time home run record with 238 and Smokey Joe Williams struck out 1,571 batters in his 25-year career. By Michael Clair / Taken from: https://www.mlb.com/