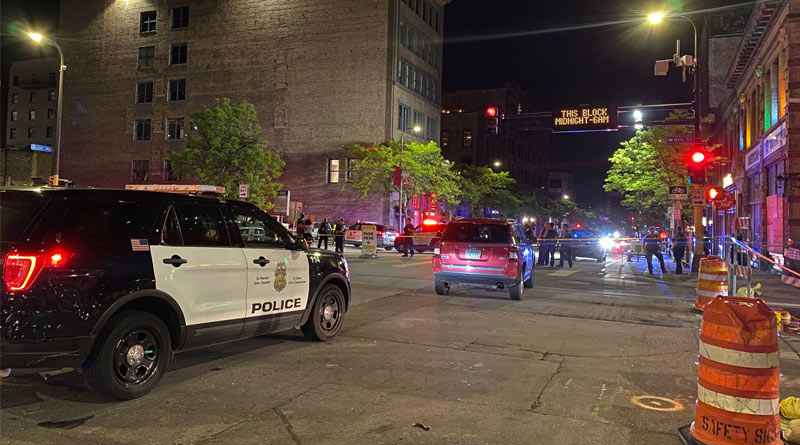 Two people died and eight others were wounded in a shooting in downtown Minneapolis early Saturday.

Police said the gunfire broke out just before 2 a.m. in the area of the 300 block of North First Avenue.

Officers in the area for bar close responded to the sound of gunshots, and found several victims on the ground in what police described as “an exceptionally chaotic scene.”

Two men died at the scene. Eight other people — five women and three men — were transported to local hospitals. Police said one man is in critical condition, while the other seven victims have non-life-threatening injuries.

“Preliminary investigation reveals that two people were standing in a crowded area and got into a verbal confrontation,” police said in a news release issued at 5 a.m. Saturday. “Both individuals pulled out guns and began shooting at each other.”

There were no immediate reports of arrests in the case.

Elsewhere in Minneapolis overnight, one person died and at least three other people were wounded in other shootings.

Police said officers responding to the scene of a two-vehicle crash near the corner of 26th Avenue North and Logan Avenue at about 8:40 p.m. Friday found a man with multiple gunshot wounds inside one of the vehicles. He was treated at the scene and later died at a hospital. The driver of the other car was taken to a hospital for treatment of “a medical issue not related to gun violence,” police said.

A man was reported to be in serious condition after being shot in the head while driving on the 5100 block of Dupont Avenue North just after 8 p.m.

One person was shot in the foot after a fight between two groups just after 11 p.m. on the 2600 block of Lyndale Avenue South.

A victim reported being grazed by gunfire while sitting in a car near the 1300 block of Irving Avenue North just before 6 p.m.

The latest deaths brought the city’s homicide total to 31 for 2021.

“Again, our collective conscience is shocked. Lives have been lost on our Northside and downtown. And we are left to process the reality that bullets have struck innocent bystanders, people welcoming the warm weather and celebrating being together again,” Mayor Jacob Frey said in a statement issued Saturday morning. “These outcomes are not fated. We can stem crime in our city, but it will take all of us coming together with a renewed commitment to preventative work and a shared resolve to stop the gun violence and bring the perpetrators to justice.”

Gun-related homicides in midsized and large American cities have skyrocketed during the pandemic, and criminologists believe coronavirus-related socioeconomic loss in many communities is driving that trend. A study by the Council on Criminal Justice tracked a 30 percent increase in homicides overall in a sample of 34 U.S. cities in 2020 as well as an 8 percent increase in gun assaults. MPR News Staff

The Associated Press contributed to this report.