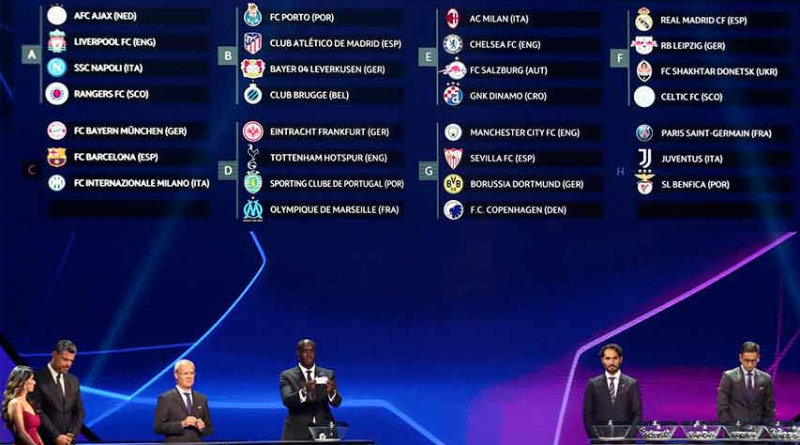 Any team with designs on winning the 2022/23 UEFA Champions League needs to start by getting out of the group stage first. That path is now clear after the group-stage draw was held on Thursday, August 25 in Istanbul, Turkey.

There are a couple of candidates for the so-called ‘Group of Death’ with Group C featuring Bayern Munich, Barcelona and Inter Milan along with Czech side Viktoria Plzen. Group H also won’t be so easy with PSG, Juventus and Benfica the favorites to advance, and Maccabi Haifa likely bringing up the rear.

Those two groups also stand out for players facing their ex-clubs. After a contentious move to Barcelona over the summer with not-so-friendly words exchanged, Robert Lewandowski gets to take out his frustrations against Bayern Munich and show why he felt it was the right move.

Juventus winger Angel Di Maria will go up against his former club PSG, though he left that club on different terms than Lewandowski. Also, Erling Haaland will get a reunion with Borussia Dortmund after becoming a world star with the German side. It should be an emotional return for him to his adoring fans at Signal Iduna Park.

Each of the eight groups consist of four teams pulled from four different pots with the lower ranked teams spread across Pot 3 and Pot 4.

How does the Champions League group stage work?

No teams from the same nation were allowed to be drawn together at this stage. The first juncture of the competition where that will be possible is the quarter-final stage.

Each group will play a round-robin format, with each side facing the other three opponents home and away.

At the conclusion of those six group matches, only the top two finishers in each group will advance to the knockout stage. That will whittle down the original field of 32 clubs to a group of 16 who will keep their trophy dreams alive.

There’s an added wrinkle to this season’s tournament format. Given the break for the 2022 World Cup in November, the six group matchdays will be condensed into an eight-week span which will only add to the degree of difficulty. It could also lead to a few more surprise results during the group stages.

Champions League pairings and pots
The eight groups are labeled A through H, and they were comprised of four teams selected from each of the four different pots during the group stage draw on August 25.

Pots 2-4 are a lot easier to work out: They were sorted based on a team’s ranking in the UEFA club coefficient list. The top teams were allotted to Pot 2, and the lowest-ranked teams occupied Pot 4.

Clubs from the same country could not be drawn together. Also, UEFA paired up certain clubs from the same nation to ensure they don’t play at the same time during the group stage. As such, when any of the below teams were drawn into groups A-D, the team they were paired with automatically was assigned (by a computer in the computer-assisted draw) to groups E-H: