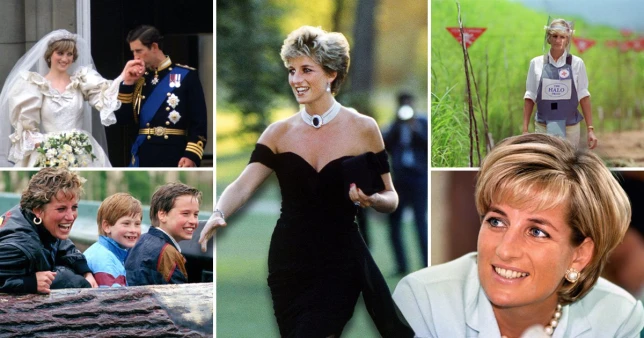 Remembering Diana: iconic pictures of the life of the Princess of Wales

Until her tragic and untimely death exactly 25 years ago today, Diana, Princess of Wales was one of the most photographed women in the world.

A quarter of a century after the fateful car crash in Paris which claimed her life aged 36, the late princess continues to captivate audiences across the globe.

Diana won the hearts of the nation in 1981 when she tied the knot with Prince Charles – with their kiss on the balcony at Buckingham Palace described as the most memorable of all time.

It was just one of many iconic moments which followed – from her early days of motherhood after giving birth to Prince William and Prince Harry, to life outside the Royal Family in the wake of her divorce.

Diana also made headlines for her unique sense of style, with her sartorial choices having a huge influence on trends.

Perhaps most importantly, she will always be remembered for her extraordinary ability to connect with the public.

From her historic minefield walk in Angola to shaking hands with an Aids patient, Diana’s compassion and kindness led to her being known as the ‘People’s Princess’ – and provoked a huge outpouring of grief when she died.

Here, Metro.co.uk celebrates the life of Diana with 25 of her most iconic images captured on camera.

Charles and Diana revealed they were engaged on February 24, 1981 after meeting four years earlier in 1977, when the Prince was in a relationship with her older sister, Sarah Spencer.

However she was left ‘absolutely traumatised’ after Charles, when asked if they were in love, responded: ‘Whatever love means’.

The ‘wedding of the century’

Charles and Diana tied the knot on Wednesday, July 29, 1981 at St Paul’s Cathedral, in what was described as the ‘wedding of the century’.

Diana, then titled Lady Diana Spencer, was just 20 when she married the future king, then aged 32.

The nuptials were viewed by more than 750million people in 74 countries, cementing its place in television history.

She was determined her sons’ childhoods should be as normal as possible and refused to let their titles stand in the way of them enjoying fun life experiences.

One fan recalled meeting the Princess at Thorpe Park in the 1990s, describing how she was just a ‘regular mum’.

Diana died before landmines were outlawed but son Harry has vowed to champion her ground-breaking work, telling an audience in Angola how it was a ‘humanitarian issue, not a political one’.

Equally monumental was her decision to shake hands with an Aids patient in 1987 without gloves – a simple and moving act of human kindness which showed the world the devastating illness was deserving of compassion and understanding.

Diana is still hailed as the ‘ultimate fashion influencer’ with her timeless sense of style continuing to inspire millions to this day.
Life after divorce

Diana revealed a different side of herself after her separation from Charles in 1992 gave her a newfound sense of freedom.

The couple divorced in 1996, when she was stripped of her Her Royal Highness title and became officially known as Diana, Princess of Wales.

Their split is said to have been triggered by her infamous and now discredited interview with Martin Bashir for BBC’s Panorama.