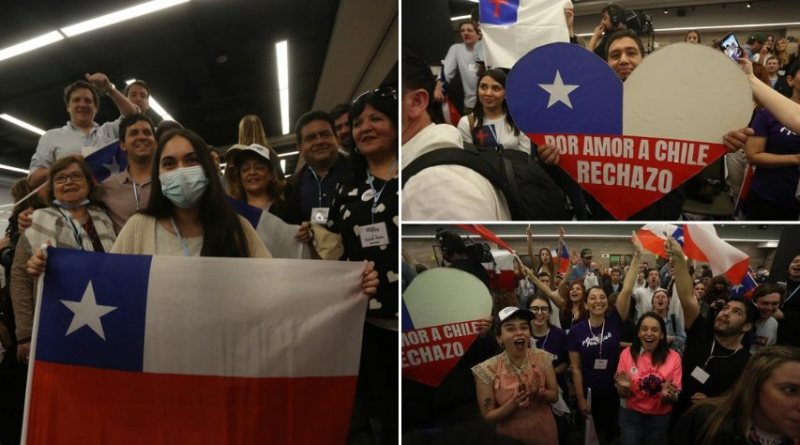 With more than 70% of ballots counted, activists accept that the bid to replace the Pinochet-era settlement has failed

Chileans have voted comprehensively against a new, progressive constitution that had been drafted to replace the 1980 document written under Gen Augusto Pinochet’s dictatorship.

With 96% of the votes counted in Sunday’s plebiscite, the rejection camp had 61.9% support compared with 38.1% for approval amid what appeared to be a heavy turnout with long lines at polling states. Voting was mandatory.

Senator Ximena Rincón, one of the leaders of the reject campaign, described the victory as “clear and emphatic”, and called for a new constitutional convention to be convened.

The approval camp conceded defeat, with its spokesman Vlado Mirosevic saying: “We recognize this result and we listen with humility to what the Chilean people have expressed.”

Having voted on Sunday morning in Magallanes, Chile’s southernmost region, Boric proclaimed that, whatever the result, he would seek to “convene a broad national unity … and move forward with this process”.

The 1980 document drawn up under Pinochet will now remain in force and Chile’s future looks decidedly uncertain.

In 2020, an initial plebiscite saw nearly 80% of voters opt to draft a new constitution, but after an arduous year of negotiations, people appear to have expressed their dissatisfaction with the end product.

As results trickled in and the reject camp’s lead grew, a number of ashen-faced demonstrators arrived in the main square in the heart of the capital, Santiago.

Some expected protests to rock the capital on Sunday night in an echo of the 2019 demonstrations that started the constitutional reform process.

The proposed constitution included a long list of social rights and guarantees that had appeared to respond to the demands of that vast social movement.

It enshrined gender parity across government and other organs of the state – for the first time anywhere in the world – prioritised environmental protection and recognised Chile’s Indigenous peoples for the first time in the country’s history.

The decision to reject a constitution that guaranteed women’s rights and gender parity was made 70 years to the day since women were first given the vote in Chile.

“This is a badly written constitution,” said Carmen Fuentes, 61, who cast her vote in a wealthy north-eastern suburb of Santiago. “There’s been a division in this country for a long time, and this plebiscite won’t change that.”

Many criticised the document’s guarantees for Indigenous people, which they said would divide Chile. Others warned that the shakeup of the political system was unnecessary and experimental.

In the centre of the city, others were more optimistic that a change could be possible, citing the need to shed Chile of the Pinochet-era constitution and the model it enshrined, moving on to a more egalitarian, democratic future.

But that future now looks distant. Boric has expressed a willingness to repeat the constitutional process, but the basis for reform is still very much up for debate.

Some of the constitution’s most prominent critics have mooted allowing congress to reform the 1980 document or including experts in a new process, but details were light from both sides, with neither willing to commit to a possible way forward. John Bartlett in Santiago