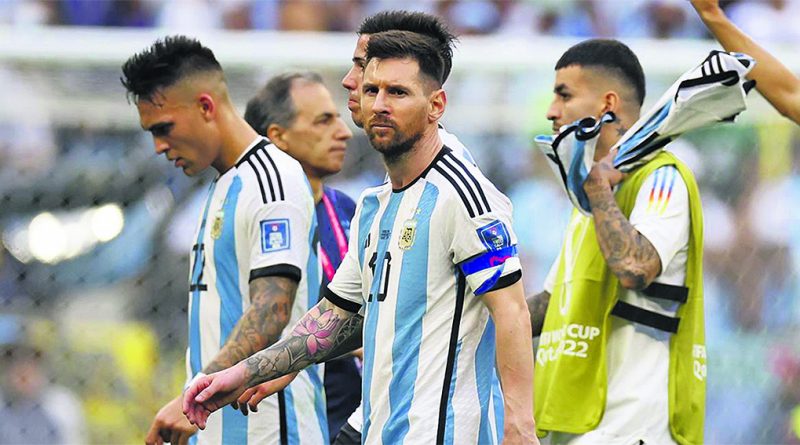 Argentina’s 36-match unbeaten streak ended in absolutely stunning fashion on Tuesday in a 2-1 loss to Saudi Arabia in the 2022 World Cup.

The Saudis scored twice in a six-minute span to start the second half and take the lead after a first-half goal by Lionel Messi. Argentina poured on the pressure in the second half but couldn’t get a game-tying goal.

Saudi Arabia was +1800 to win the Group C opener straight up ahead of the match at BetMGM, meaning a $10 bet was worth $180. A $10 bet on Argentina to win, meanwhile, would have netted you $1.54 had it won. Simply put, the game is one of the biggest upsets in recent World Cup history.

Saleh Al-Shehri scored the first goal for Saudi Arabia in the 48th minute. It felt after his goal that Argentina would simply respond with another and all would be back to normal.

Instead, Salem Al-Dawsari knocked in a fantastic goal to give Saudi Arabia the lead. Saudi Arabia had three shots the entire game. And the only two that were on goal were the two shots that went in.

Argentina’s best chance to tie the game might have come in the 101st minute but Julian Alvarez’s header was saved by Mohammed Al-Owais.

Argentina hadn’t lost since 2019
Argentina entered the tournament as the No. 2 favorite behind Brazil and in the middle of a 36-game unbeaten streak that dated back to 2019. That streak included a win in the 2021 Copa America tournament over Brazil to give Lionel Messi his first major international trophy.

While this Argentina team didn’t have the star power that previous Argentina teams did, it was easy to see how they could win the tournament given their form. Messi is still one of the best players in the world up front and the midfield and defense had been strong.

Argentina had 3 disallowed goals
Argentina found the back of the net four times in the first half but three of those goals were called back because of offsides infractions.

Saudi Arabia entered the game with a clear game plan — it wanted to play a high defensive line and try to catch Argentina offside. It can be a risky strategy — Lautaro Martinez’s disallowed goal came after he was barely offside.

But the strategy also ultimately worked. Argentina was offside seven times in the first half and then three more times in the second half. The Argentines had nearly 70% possession and nine corner kicks. But the inability to finish in front of goal — when the team was onside, that is — was costly.

More from the original source: https://sports.yahoo.com/world-cup-2022-saudi-arabia-pulls-incredible-upset-in-2-1-win-over-argentina-120726180.html