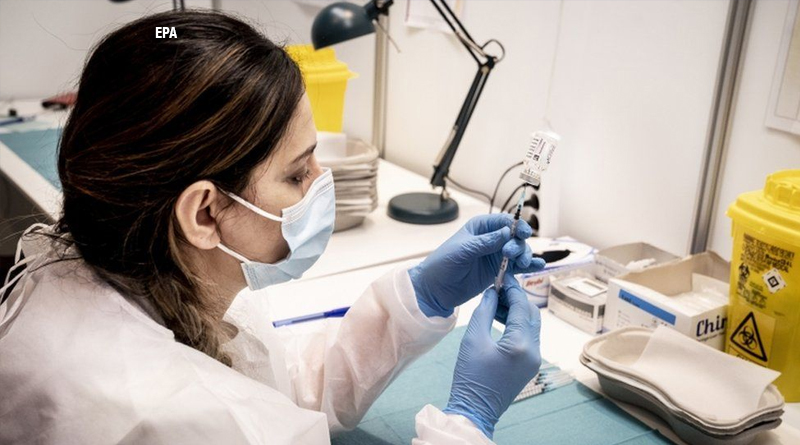 There is no indication that the Oxford-AstraZeneca Covid-19 vaccine is linked to an increased risk of blood clots, the EU’s medicines regulator says.

It said the number of cases in vaccinated people was no higher than in the general population.

The statement came after a number of countries, including Denmark and Norway, suspended the use of the jab.

The suspension followed reports that a small number of people had developed clots after receiving the vaccine.

There were also reports that a 50-year-old man had died in Italy after developing deep vein thrombosis (DVT) following a dose of the jab.

“There is currently no indication that vaccination has caused these conditions, which are not listed as side effects with this vaccine,” the European Medicines Agency (EMA) said on Thursday.

“The vaccine’s benefits continue to outweigh its risks and the vaccine can continue to be administered while investigation of cases of thromboembolic events is ongoing,” it added.

It said there had been 30 cases of “thromboembolic events” among the five million Europeans who have received the jab.

AstraZeneca said the drug’s safety had been studied extensively in clinical trials. “Regulators have clear and stringent efficacy and safety standards for the approval of any new medicine,” a spokesperson said.

In the UK, the Medicines and Healthcare products Regulatory Agency (MHRA) said there was no evidence the vaccine had caused problems, and people should still go and get vaccinated when asked to do so. “Blood clots can occur naturally and are not uncommon. More than 11 million doses of the Covid-19 AstraZeneca vaccine have now been administered across the UK,” said Phil Bryan of the MHRA.

The decision to temporarily suspend the use of AstraZeneca’s jab has come as a setback for a European vaccination campaign that has stuttered into life, partly due to delays in delivery of the drug.

However, there was a positive development on Thursday as the EMA approved the single-shot Johnson & Johnson (J&J) vaccine. “More safe and effective vaccines are coming to the market,” EU Commission President Ursula von der Leyen tweeted, although some reports suggest that J&J vaccine shipments may not arrive until April.

It comes on the same day a study revealed that the US Novax vaccine is 96% effective in preventing the original strain of covid and 86% effective against the English strain. Novavax is hoping to file for approval in the UK during the second quarter of 2021, AFP news agency reports.

The suspensions in Italy and Austria involve different batches of the vaccine.

In an earlier statement, the EMA said Denmark’s decision was a “precautionary measure [taken] while a full investigation is ongoing into reports of blood clots in people who received the vaccine, including one case in Denmark where a person died”.

Italy’s medicines body said its decision was “precautionary”, adding that no link had been established between the vaccine and subsequent “serious adverse events”.

Two Italians are reported to have died after receiving the vaccine, and an unnamed source told Reuters news agency that their deaths are what prompted the temporary suspension.

Austria, meanwhile, took its decision after a woman died 10 days after vaccination because of “severe blood coagulation problems”. The Austrian doses were part of a batch of one million doses, identified as ABV5300, that was sent to 17 European countries.

The EMA said its safety committee was reviewing the Austrian case but made clear that there was “no indication that vaccination has caused these conditions”.

No details of the Danish death have been given, but health officials said they were pausing use of the vaccine for 14 days in what Health Minister Magnus Heunicke called a “precautionary measure”. Although no link had been established, he said “we must respond in a timely and careful manner” until a conclusion was reached.

Norway’s public health institute said it would follow the Danish move to halt all use of the vaccine until the Danish cases were investigated. “We are waiting for more information to see if there is a link between the vaccine and this blood clot case,” said Geir Bukholm of the National Institute of Health.

Iceland was also suspending use of the vaccine, the chief epidemiologist told public broadcaster Ruv, to “err on the side of caution”.

Later on Thursday, France and Germany said they would continue to use the AstraZeneca jab. “The benefits… are higher than the risks,” French Health Minister Olivier Véran said. BBC