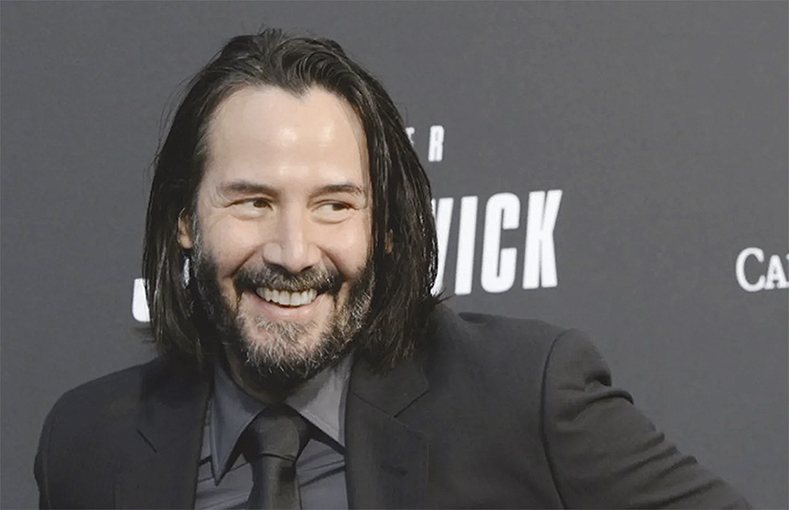 He was once the hottest actor in Hollywood. The Matrix had made him an icon. But then his career fizzled, not that he ever stopped working. He appeared in two Matrix sequels and many forgettable potboilers.

But then John Wick happened, and in Parabellum, his third outing, currently getting rave reviews, the 54-year-old is back on top. At his press conference in New York he is surprisingly cooperative, which wasn’t always the case.

In previous interviews, he wouldn’t talk about his father, who was serving time in jail for cocaine possession, or about the loss of his child (with the late actress Jennifer Syme) that was stillborn. “I don’t feel I have any obligation to share my private life with people who enjoy my work”, was his rationale.

Although born in Lebanon, Reeves holds a Canadian passport. even though his mother is British and his father is of Chinese-Hawaiian parentage.

The name Keanu means “cool breeze over the mountains” in Hawaiian. The family lived in Australia and New York before settling in Toronto, where he spent his teenage years.

His mother designed costumes for singers like Emmylou Harris and Dolly Parton, and after her divorce from Reeves’ father, she married Paul Aaron, best known for having directed A Different Story.

When Reeves was 18, he moved to Los Angeles, where he stayed with his stepfather. Eight months later he landed the lead (and great reviews) in River’s Edge.

He did Shakespeare, playing Antonio in Kenneth Branagh’s Much Ado About Nothing on film and Hamlet in a theatre production in Winnipeg, Canada.

Occasionally he was the bassist for the alternative band Dogstar, which disbanded in 2006. Speed, opposite Sandra Bullock, was his breakthrough movie, although he later turned down US$15 million to do a sequel because “the movies I wanted to make were movies I wanted to see.”

Always a caring person, he gave the ancillary profits from The Matrix sequels to the crew, but when asked about it he became visibly angry.

“I’d rather people didn’t know that. It was a private transaction. It was something I could afford to do, a worthwhile thing to do,” he said. Reportedly it netted them over US$40 million.

Obviously The Matrix means a lot to you. How much like Neo are you? He’s a better man than me but I try to live up to his values. What does love mean to you? You mean romantic love? You know, I’m the lonely guy.

I don’t have anyone in my life. But if it does occur, I would respect and love the other person; hopefully it’ll happen for me.

You describe yourself as a lonely guy. Are you content with that? I don’t concern myself with it that much. I’m an actor, so in terms of what you’re asking about, I have no answer.