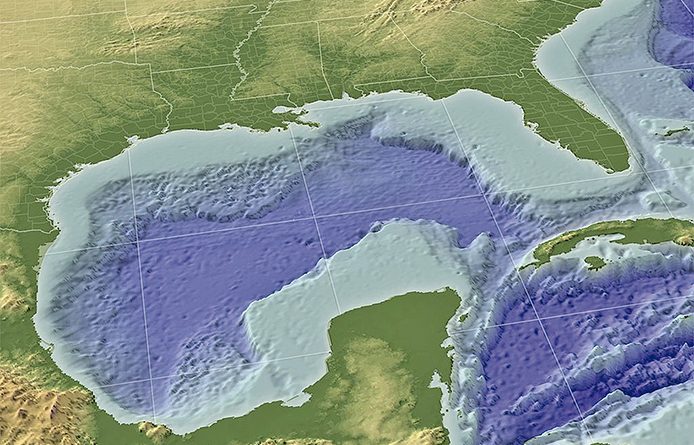 Dead zones are areas of the world’s water bodies which contain very little or no oxygen, creating lethal conditions for marine life.

Every year in the summer months, one of these dead—or hypoxic—zones forms in the Gulf of Mexico in what is one of the largest examples of this phenomenon on the planet.

Now, the National Oceanic and Atmospheric Administration (NOAA) has predicted that this summer’s Gulf of Mexico dead zone could grow to around 7,829 square miles—or about the same size as the state of Massachusetts—based on data collected by the U.S. Geological Survey (USGS.)

If the dead zone does reach this size, it would far surpass the average over the past five years (5,770 square miles) although it won’t be the largest recorded. That title goes to the 2017 Gulf of Mexico dead zone, which grew to a size of 8,776 square miles.

Scientists say that the annually recurring phenomenon is caused by excessive nutrient pollution—originating from human activity in farms and urban areas—which drain into the Mississippi River Basin and eventually get washed into the Gulf.

When this excess of nutrients—particularly nitrogen and phosphorus—enters the Gulf it fuels a rapid increase in the growth of certain types of algae, otherwise known as an algal bloom. When these algae decompose, they consume oxygen, thus creating a state of hypoxia which is inhospitable to the vast majority of marine life.

According to the NOAA scientists, the dead zone this year is expected to be particularly large, due to the unusually heavy rains in the Mississippi Basin region this spring.

These led to record-high river flows and a higher than average washing of nutrients into the Gulf. In fact, USGS data indicates that in the month of May alone, around 156,000 metric tons of nitrates and 25,3000 metric tons of phosphorus poured into the sea from the Mississippi.

“The models help predict how hypoxia in the Gulf of Mexico is linked to nutrient inputs coming from throughout the Mississippi River Basin,” Steve Thur, director of the NOAA’s National Centers for Coastal Ocean Science, said in a statement. “This year’s historic and sustained river flows will test the accuracy of these models in extreme conditions, which are likely to occur more frequently in the future according to the latest National Climate Assessment.”

“The assessment predicts an increase in the frequency of very heavy precipitation events in the Midwest, Great Plains, and Southeast regions, which would impact nutrient input to the northern Gulf of Mexico and the size of the hypoxic zone,” he said.