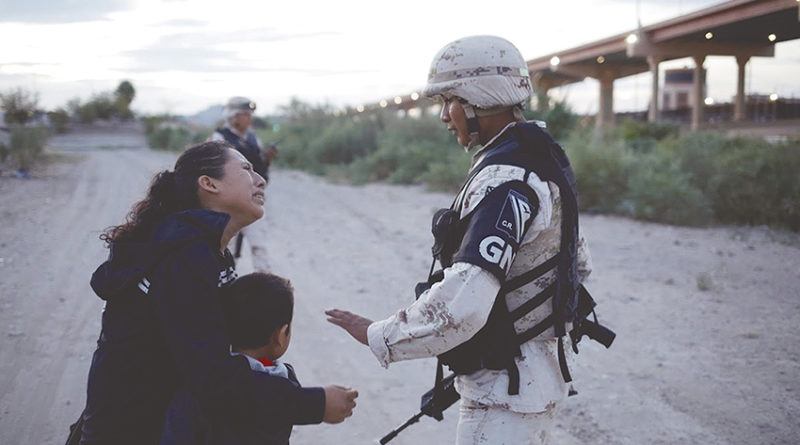 Ledy Perez fell to her haunches, a clenched hand covering her face as she wept, an arm clutching her small 6-year old son, who glared defiantly at the Mexican National Guard soldier blocking them from crossing into the United States.

The plight of this mother and son who had traveled some 1,500 miles (2,410 km) from their home country of Guatemala to the border city of Ciudad Juarez, only to be stopped mere feet from the United States, was captured by Reuters photographer Jose Luis Gonzalez as twilight approached on Monday.

“The woman begged and pleaded with the National Guard to let them cross … she wanted to cross to give a better future” to her young son Anthony Diaz, Gonzalez said. The soldier, dressed in desert fatigues, an assault rifle slung over his shoulder, said he was only following orders, according to Gonzalez.

The soldier did not disclose his name.

One of several images Reuters published of the scene, the photo was picked up widely on social media. It has thrown into the spotlight the role Mexico’s militarized National Guard police force is playing in containing migration, mostly from Central America.

President Andres Manuel Lopez Obrador created the National Guard to bring down record homicide rates, but almost a third of its members are now assigned to patrolling the border to placate President Donald Trump’s demands of stemming the flow of U.S.-bound migrants.

The soldier displayed no overt aggression during the nine-minute encounter with Perez and her son. Still, the power dynamics apparent in the image resonated with criticism of the treatment migrants are receiving during the clampdown by Mexico.

Former Mexican President Felipe Calderon, who retweeted the picture after it was posted by former Mexican ambassador to the United States Arturo Sarukhan, wrote “what a pity, Mexico should never have accepted this.

The National Guard and Lopez Obrador’s office did not immediately respond to requests for comment.

In June, Lopez Obrador said the National Guard did not have orders to detain migrants crossing the U.S. border. He regularly emphasizes that the clampdown must not violate rights. (Reuters)