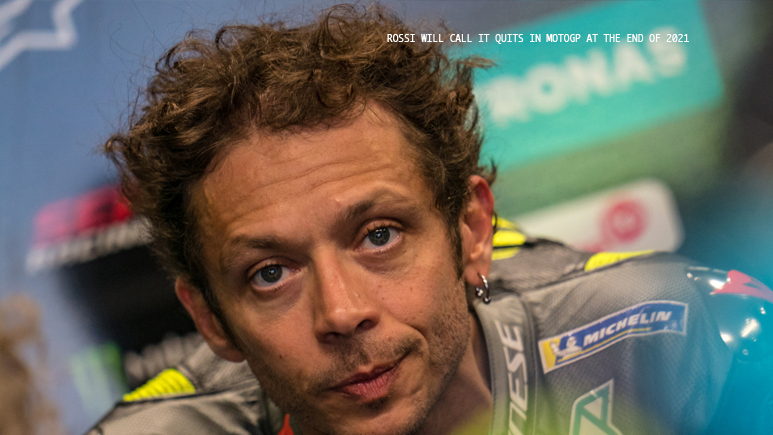 The legendary MotoGP career of Valentino Rossi will come to a close at the end of the 2021 season, the Italian has announced in a press conference.

After rising through the ranks of 125cc to 500cc and then MotoGP, with 115 career victories, nine world titles and numerous battles with rivals along the way, the 43-year-old will call time on his motorcycle racing at the end of his 26th world championship season.

I’ve decided to stop at the end of the season. This will be the last season for me as a MotoGP rider,” The Doctor said.

“I have done this thing for more or less 30 years. It’s a very sad moment because I won’t race next year with a motorcycle. Next year my life will change. It was great, I enjoy a lot and it was really fun. I had unforgettable moments.”

In a 30 minute conference which included a highlights reel of his illustrious career, Rossi said that his results this season had convinced him to quit, but that he was a “lifelong racer” and would carry on for “another 20 years” if he could. Instead, he announced that he would compete in cars next year, with the aim of entering the Le Mans 24 Hours.

Speculation over the future of The Doctor had been rife during the year in which Rossi announced he would be starting his own premier class VR46 team for 2022.

Rossi’s last podium finish came at the Andulasian GP in 2020 in which he finished a popular third at Jerez. The result left him one short of 200 in MotoGP and 500cc races, a milestone he has yet to hit and remains unlikely of doing so with Petronas Yamaha SRT in 2021.

This season has been a struggle for the nine-time champion after being replaced at the Yamaha team by Fabio Quartararo. Since joining Petronas SRT, Rossi has posted a best result of 10th at the Italian GP.

He has three DNFs so far in 2021, crashing out of the Portuguese, Catalan and Dutch TT races.

“I decided [to retire] in the summer break,” said Rossi. “At the beginning of the season… I want to continue [into 2022]. But I said I need to understand if I’m fast enough. Unfortunately during the season the results are less than what we expect, so race by race, you know, I start to think, and what’s next.

Rossi said that still hoped to be competitive in the second half of this season, before waving farewell at the last race in Valencia. Asked about his perfroamnces in recent years, Rossi aid he could not explain why he had found it so difficult to fight at the front.

“In 2018 I did a great season: I finished third in the championship,” he said. “I don’t win a race, but I did a lot of points. “In 2019 I started in very very well, but after something changed. What, sincerely, I don’t know.

“So, some different, different things, I didn’t know precisely why. This year, I think, ‘Ok, I cannot win, but I can be more more competitive’. But we will see, we have another half of the season and we try to be stronger than in the first part.”

With the formation of his own Aramco VR46 Racing, running Ducatis in 2022, Rossi joked that he had an “official offer” to remain on the MotoGP grid for next year, alongside his half-brother, Luca Marini, but decided against beginning a longer-term project. “I think deeply to continue, because I like to race in my team,” he said. “It is a good project if you have two or three years. But if you think that you have just one season, maybe there are more risks than the good things.”

The Doctor will sign off his career holding the record for most wins, most second and third places, most podium finishes, most points and longest MotoGP career and as a legend of the sport.

But the man who finished runner-up in six championships, said that he regretted not winning a tenth title. “I am a little bit sad to not win the tenth championship,” he said. Because I think that I deserve [it] — for my level and for my speed. But anyway, it is like this, but I think that I cannot complain about the result of my of my career.

“The three titles that are the most important in my career is 2001, when I won the last 500cc championship. 2004, when I won with Yamaha, and 2008, because already in 2008 I was old and I was finished. After five championship in a row in MotoGP, I lose for two years. Usually, in a normal career, it’s over.”

Rossi secured five consecutive world titles from 2001-2005 with Honda and then Yamaha and a further two with the latter manufacturer in 2008 and 2009, a stint that included an incredible 75 race victories.

Two fruitless years with Ducati followed before he returned to Yamaha in 2013 where he finished runner-up in the championship to Marc Márquez in the 2014 and ’16 seasons and Jorge Lorenzo in 2015.

Since then, the 42-year-old has taken a solitary victory, coming in 2017 at the Dutch TT in Assen and recorded a best finish of third in the riders’ standings in the 2018 season.

But the Italian has remained an icon of MotoGP racing, a rider that fans take to heart, no matter the results — even to the bemusement of Rossi. “I have an incredible support from all the fans [from across] the world,” he said. “Sometimes it’s difficult to understand, also for me it is a little bit of a surprise but these make me always very, very proud. And so, I have to say thank you to all, to all the fans.

“The difference between me and all the other great riders of the MotoGP history is — seriously I don’t know why — for some reason is, I was able to bring a lot of people close to motorcycle racing. Without me they don’t know MotoGP, especially in Italy. I did something in the first part of my career that switched on the emotion of the normal people, and about these I’m very proud, because it’s something really special.”

Although Rossi is leaving the grid he looks set to remain an influence for many more years, thanks to his VR46 Academy, which is bringing through a new generation of Italian talent. Graduates Franco Morbidelli and Pecco Bagnaia are already racing in MotoGP, with many more in the pipeline. AUTHOR. Jake Williams-Smith