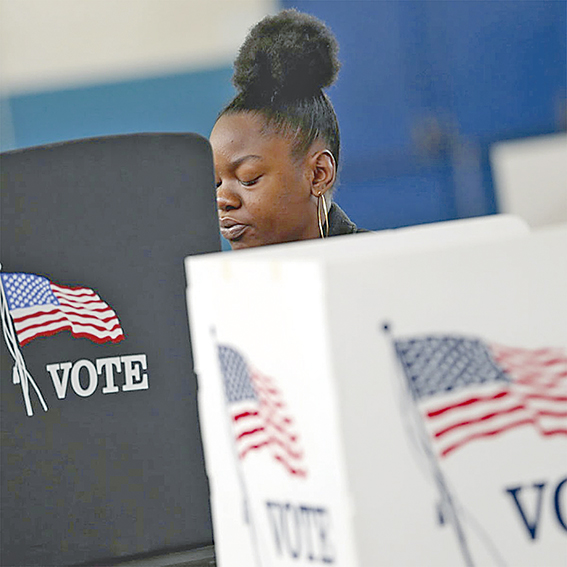 TULSA, OK — Democrats won control of the House of Representatives Tuesday night in a bitter defeat for Donald Trump, who had insisted that even though his name was not on the ballot, the election was all about him. In many key districts the election was largely a referendum on the president’s policies, from the vilification of immigrants to Trump’s efforts to cut the legs from under the Affordable Care Act. Even in deep red Oklahoma, Democrat Kendra Horn won the District 5 congressional seat.

Republicans kept their majority in the U.S. Senate, assuring that even though Trump’s legislative agenda may have been effectively halted, his judicial agenda remains safe.

In Oklahoma, it was a good day to be a Republican, with GOP candidates winning all statewide offices and all but one congressional race. Kevin Stitt defeated Drew Edmondson to become Oklahoma’s next governor, and Kevin Hern beat Tim Gilpin in the race to fill the first district congressional seat formerly held by Jim Bridenstine.

Republicans won 14 out of 18 State Senate seats that were up for grabs, and the GOP also dominated in 57 out of 70 State House races. Tulsa Democrats Denise Brewer, John Waldron, and Melissa Provenzano did win State House seats, but incumbent Democrat Karen Gaddis lost her bid for reelection. Meloyde Blancett, a Democrat representing midtown Tulsa, won a second term.

State Question 793 was deadlocked 50-50 throughout the night, but the “no” vote ultimately prevailed, meaning Oklahoma remains one of three states prohibiting optometrists from practicing inside large retailers like Walmart or Target.

State Question 794, a victims’ rights initiative, passed overwhelmingly but is certain to face a legal battle challenging its constitutionality.

State Question 798, which would have made candidates for Governor and Lieutenant Governor run on the same ticket, was defeated.

State Question 800, a measure creating a fund to invest part of the revenue from oil and gas taxes, failed to pass, as did State Question 801, a proposal to allow local school districts a wide latitude in spending property tax money.

Kara Joy McKee won her bid to represent District 4 on the Tulsa City Council, and Cass Fahler narrowly overcame his opponent to win in District 5. Lori Decter Wright came in first in a seven-way race to fill the District 7 council seat vacated when Anna America left to head up the city Parks Department, but because Wright failed to get more than 50 % of the vote she will face the second-place winner, America’s husband Michael Patton, in a runoff election.

Republican Stan Sallee defeated Democrat Kevin Matthews in the race for Tulsa County Commissioner, District 1, a disappointment for those who hoped Matthews might work to end the controversial 287(g) immigration enforcement agreement with the federal government. (La Semana)