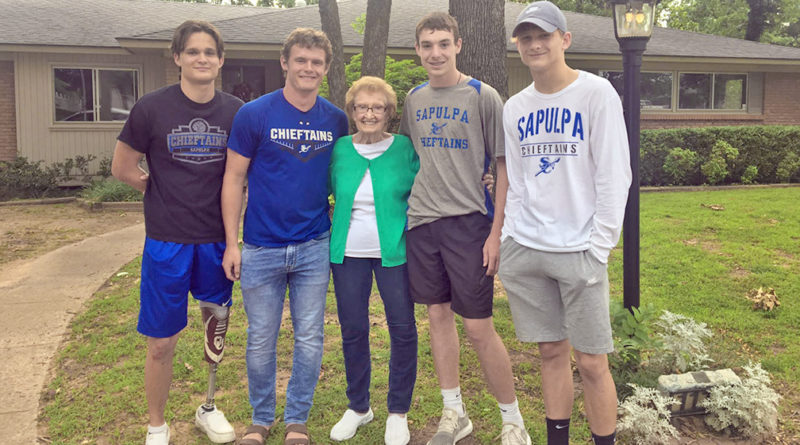 An act of heroism by four teenagers from Sapulpa has put Oklahoma in the national spotlight, this time not because of tornadoes or floods.

The story of how the four young men saved an elderly neighbor from a burning house last month first drew attention when the woman’s relative described the incident in a blog entry entitled “An Open Letter of Thanks.”

“Two weeks ago, my 90-year-old mother, Catherine Ritchie, was preparing herself for bed at around 9pm,” Missy Ritchie Nicholas wrote. “After brushing her teeth and hair, she turned around to find her bed completely engulfed in flames. She made an attempt to extinguish the flames herself by throwing blankets and pillows on the fire. The smoke and heat were so overwhelming that she immediately got disoriented, gave up fighting the fire, and decided to flee.”

The letter details how Ritchie’s situation quickly went from bad to worse.

“She pushed the emergency call button she wears on her necklace, called 911, and attempted to get out of her now engulfed bedroom,” Nicholas explained. “She walked into the closet several times thinking it was the door that leads to the hallway. It wasn’t. She couldn’t find her way out. She was stuck. Smoke everywhere.”

Fortunately, four boys ranging in age from 14 to 17 saw that the house across the street was on fire and rushed into action.

“One started breaking the glass on the front door,” Nicholas wrote. “One called 911. One went to the back door and began kicking it in. One went to the neighbors for an ax and help. Within minutes, a door was kicked in by a 14-year-old child who found my mother in the hallway outside of her bedroom and picked her up in his arms. Kids who are told about all the things they aren’t old enough to do saved the life of the most precious and beloved woman we know.”

Nicholas called the four, “courageous young men…who risked their own lives, their own safety…and they carried my mother out of her burning home into the street, where firetrucks and ambulances would soon arrive.”
Dylan Wick, 16, Nick Byrd, 14, Seth Byrd, 16, and Wyatt Hall, 17 are being praised as heroes in newspapers and on television across the country, and most importantly by the family of the woman whose life they saved.

“Thank you for your selfless acts of heroism and courage,” Nicholas wrote in the letter, which was also signed by nine other family members and “42 very grateful grandchildren.”

The letter concluded with a nod of appreciation to the boys’ parents, “who obviously raised you in such a way that lead to you making life saving and heroic decisions on behalf of someone else.” (La Semana)