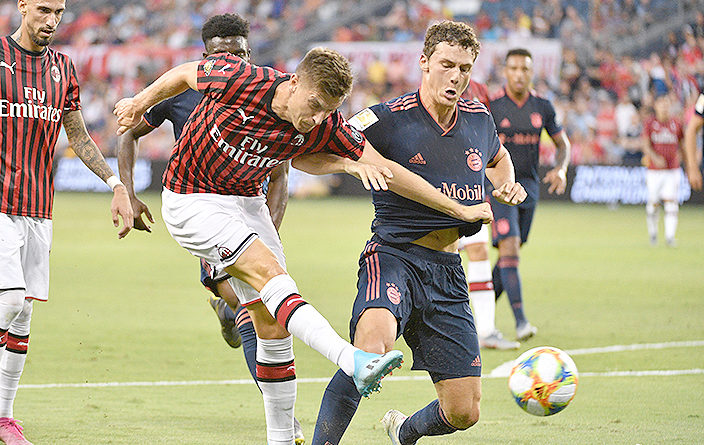 The International Cup, a premier event, Kansas City lived to the fullest.

Summer is here, and this only means one thing: International Champions Cup. International football arrives in the United States and incidentally reaches the Blue Hell of Sporting Kansas City. Two teams, 12 Champions League and one goal, the victory.

At the beginning of the game Theo Hernández overflowed on the left side where he left Süle lying but he found Manuel Neuer who blocked the shot without problems.

Bayern Munich was very incisive in the attack especially by the bands, with mastery of the ball for long periods while the rossonero team very passive and unable to leave their own half but very well defensively.

In the 20th minute, Theo Hernández again with a dangerous play gives Daniel Maldini a death pass (son of the legend Paolo Maldini) and the ball passes centimeters above the crossbar.

Theo Hernández is injured and on a stretcher minutes before the end of the first half.  In the minutes of replacement a deep pass from Kimmich enables Goretzka to kick and score for the Bavarian team beating Donnarumma. 1-0 ends the first half.

Already in the second half, with the usual changes it started a little hot with a Çalhanoğlu entry on Coman that almost hit the blows with the Turk.

In the 63rd minute, a great collective play left Cutrone in front of goalkeeper Ulreich who drew a clear goal play.

In the 82nd minute, Bayern Munich scored a goal that the central referee annulled for offside Davies.  Minutes later, Thiago Alcántara gave a pass as with his hand and Alaba sent it to save but the referee again annulled for illegal position of the Austrian defender.  The Niko Kovač team won by the minimum in a game that they felt as locals since a large part of the fans supported the German team.