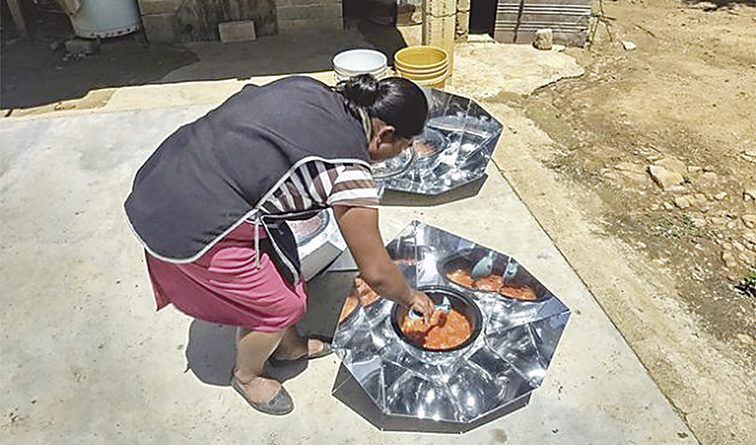 Reyna Díaz cooks beans, chicken, pork and desserts in her solar cooker, which she sets up in the open courtyard of her home in a poor neighborhood on the outskirts of this town in southwestern Mexico.

“My family likes the way it cooks things. I use it almost every day, it has been a big help to me,” Díaz told IPS as she mixed the ingredients for cochinita pibil, a traditional pork dish marinated with spices and achiote, a natural coloring.

She then placed the pot on the aluminum sheets of the cooker, which reflect the sunlight that heats the receptacle.

Before receiving the solar cooker in March, Díaz, who sells atole, a traditional hot Mexican drink based on corn or wheat dough, and is raising her son and daughter on her own, did not believe it was possible to cook with the sun’s rays.

“I learned while working with the local women. It was hard, like breaking stones; people knew nothing about it. Now people are more open, because there is more information about the potential of solar energy. In rural areas, people understand it more.” — Lorena Harp

“I didn’t know it could be done, I wondered if the food would actually be cooked. It’s a wonderful thing,” said this resident of the poor neighbourhood of Vicente Guerrero, in Villa de Zaachila, a municipality of 43,000 people in the state of Oaxaca, some 475 km south of Mexico City.

One thing the inhabitants of Vicente Guerrero have in common is poverty. But although they live in modest houses that in some cases are tin shacks lining unpaved streets and have no sewage system, they do have electricity and drinking water. The women alternate their informal sector jobs with the care of their families.

Diaz used to cook with firewood and liquefied petroleum gas (LPG), which she now uses less so it lasts longer. “I’ve saved a lot,” she said.

Women in this neighborhood were taught how to use the solar cookers and then became promoters, organising demonstrations in their homes to exchange recipes, taste their dishes and spread the word about the benefits and positive changes that the innovative stoves have brought.

The solar cookers are low-tech devices that use reflective panels to focus sunlight on a pot in the middle.

Their advantages include being an alternative for rural cooking, because they make it possible to cook without electricity or solid or fossil fuels, pasteurising water to make it drinkable, reducing logging and pollution, helping people avoid breathing smoke from woodstoves, and using renewable energy.

The drawbacks are that they do not work on rainy or cloudy days, it takes a long time to cook the food, compared to traditional stoves, and they have to be used outdoors.

In Mexico, a country of 130 million people, some 19 million use solid fuels for cooking, which caused some 15,000 premature deaths in 2016 from the ingestion of harmful particles, according to data from the National Institute of Statistics and Geography (Inegi). (IPS)