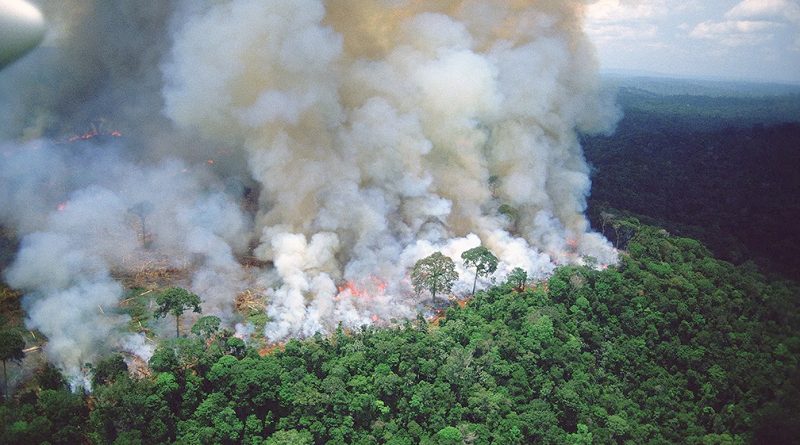 The Amazon rainforest in Brazil is battling massive forest fires, which can be seen from space as they are so extensive.

The fires have been burning for almost a month now, and the dry season means they’ve spread much faster than normal.

Some people think the fires could have been set on purpose by logging companies or farmers wanting to clear large areas of land.

After pressure from European leaders, the Brazilian president, Jair Bolsonaro, ordered the armed forces to help fight the fires.

Research from the National Institute for Space Research (INPE) has detected more than 72,000 forest fires between January and August, with 9,000 recorded just this week.

There were just over 40,000 fires recorded across the whole of Brazil for the same period in 2018.

This is the highest number of fires in the area since records began in 2013.

However, Brazilian President Jair Bolsonaro brushed off the latest data, saying it was the “season of the queimada” (meaning ‘burned’), when farmers use fire to clear land.

Climate activist Greta Thunberg said: “Even out here in the middle of the Atlantic Ocean, I hear about the record amount of devastating fires in the Amazon. My thoughts are with those affected. Our war against nature must end.”

The BTS ARMY have also added their voices to the issue, encouraging each other to spread awareness of the fires with the hashtag #ARMYHelpThePlanet on social media.

Why is the Amazon rainforest important?

The Amazon is the biggest tropical rainforest in the world.

It’s home to more than three million species of plants and animals, as well as a million tribespeople who live there.

In a typical year, the Amazon absorbs around 1.5 gigatons of carbon dioxide from our atmosphere.

Why do people set fires in the Amazon?

When large areas of trees are cut down or cleared to be used for something else, it is called deforestation.

Since the 1970s, the Amazon rainforest has been targeted by loggers who chop down trees for construction and building roads, as well as farmers, who clear areas of rainforest for plants and animals.

Some of the main causes for deforestation in the Amazon are cattle farming, soybean and palm oil farming, and oil drilling.

Fires are often started by people who want to clear an area of land quickly for use in farming, but they can sometimes get out of control.

Of all the countries in the world, Brazil relies heavily on its farming industry for produce, which brings in a lot of money and jobs for the country.

In relation to the fires in his country, President Bolsonaro has said that non-governmental organisations may be setting them in the Amazon to embarrass the Brazilian government after it cut their funding, but he gave no evidence to support this claim.

After pressure from European leaders, he ordered the armed forces to help fight the fires.

Marcio Astrini from environmental charity Greenpeace said: “Increased deforestation and burning are the result of his anti-environmental policy.”

Scientists have said the losses suffered by the rainforest have increased since Mr Bolsonaro took office in January, as his policies put development first over conserving the Amazon.

Smoke from the fires was reported to have caused a blackout in the city of Sao Paulo on Monday, which is more than 2,700km (1,700 miles) away. However, some experts have said that the smoke came from fires burning in the neighbouring country of Paraguay, which is much closer to the city.